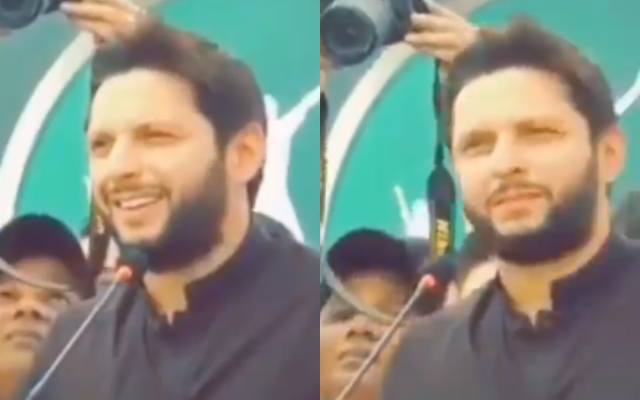 Pakistan former cricketer Shahid Afridi is one of the most lovable personalities of Pakistan. The right-handed leg-spinning all-rounder was one of the greatest all-rounders of his time. Afridi is famously referred to as ‘Boom Boom’ for his hitting capabilities. He has already taken retirement from International Cricket way back in 2016 but has continued to play in franchise leagues all around the world.

Currently, the boom boom Afridi is the part of the ongoing season of Pakistan Super League (PSL). He is representing for Multan Sultans as the all-rounder. Recently, Shahid Afridi, while addressing the fans, trolled himself for his batting. Actually, he hilariously started his speech by referring his batting less time consuming to leave the listeners in splits.

Addressing the fans, Afridi said, “Main Zyada time nahi lena chahunga aapka, apni batting ki tarah” which translates into “I won’t be taking much of your time like I did when I batted.” The video of the incident is making rounds on the Internet platform. Here we are also attaching the video of the same at the below of this article.

Shahid Afridi Thinks If India vs Pakistan Series Were To Have, It Will Be Bigger Than Ashes

The former Pakistan cricketer Afridi is nowadays quite active on social media platforms. Recently, he hosted Yuvraj Singh on his YouTube channel, where he talked for the restart of the Indo-Pak bilateral cricket and also termed as Ind vs Pak bilateral series as bigger than the Ashes.

“I think, if India and Pakistan were to have a series, it will be something bigger than the Ashes. However, we don’t seem to get it. We are letting politics get in the way of people’s love for this sport and their wish to come together. I think we need to put a few things behind us as well and so does India. We need to sit down together at a table and talk things out.” Afridi said.

Here is the video (Shahid Afridi Trolls Himself)