Shahid Kapoor had a brain-fade moment as he shared a picture of India's 2018 U-19 batch while congratulating Yash Dhull and Co. 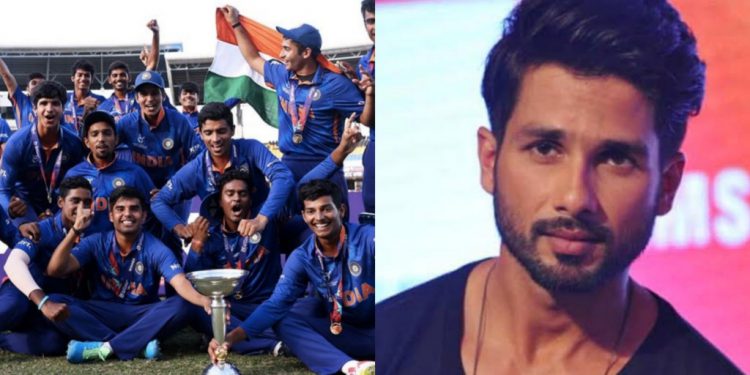 Bollywood actor Shahid Kapoor became a subject of trolling as he made a blunder while congratulating India’s U-19 team for their historic triumph in the West Indies.

As India U-19 boys lifted the World Cup trophy, Shahid took to his Instagram account and shared a story, complimenting the players for their remarkable achievement.

Shahid Kapoor gets trolled for using wrong U19 team’s picture

However, the actor committed a huge howler while doing so as he posted the image of the 2018 U-19 batch, that featured the likes of Prithvi Shaw, Shubman Gill, Shivam Mavi and many more youngsters. After Shahid realised his mistake, he deleted the Instagram story.

For his mistake, Shahid was heavily trolled on social media. Fans ripped apart the 40-year-old for not doing his research well.

Shahid Kapoor Wishing the UNDER-19 squad who won back in 2018!!
Truly he's living the character of Kabir Singh!!

Such things happens when yoh don't follow a sports and post it just for the sake to look cool#U19CWCFinal #IndiaU19 #U19WorldCup2022 pic.twitter.com/UKB37a8ksO

When you are not interested in cricket but you have to pretend due to family pressure ?? !! #ShahidKapoor pic.twitter.com/fujpcj4dVA

Shahid Kapoor has done an entire movie based on cricket recently but still can't make a little effort to know the difference between 2018 and 2022 Indian U-19 worldcup teams. Embarrassing stuff. pic.twitter.com/iMpjKcRSI7

For the unversed, Shahid will be next seen in a cricket-based movie titled ‘Jersey’, that was supposed to release in December. However, COVID-19 delayed its theatrical release. The movie is now expected to hit the cinema halls in February or March.

As it happened, India recorded a thumping victory in the finale and lifted another U-19 World Cup trophy. Opting to bat first, England made a wrong move and lost early wickets as their backs were pushed against the wall by the Indian pacers. Ravi Kumar and Raj Bawa breathed fire and bowled England out for just 189 runs.

India had a nervy start to the chase and lost opener Angkrish Raghuvanshi in the very first over. But the batters steadily took control of the innings with vice-captain Shaik Rasheed notching up his second half-century on the trot. Nishant Sindhu remained unbeaten at the score of 50, while Dinesh Bana added the finishing touches as the team then jumped in joy and held the trophy in their hands.