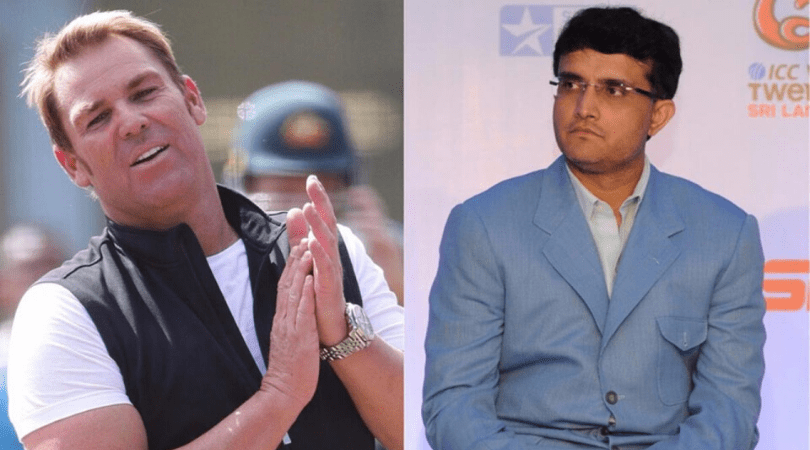 Shane Warne Asks India to Play D/N Test vs Australia, Ganguly Responds: Finally, India has played their first Day/Night Test Match in which they have registered a comfortable win against Bangladesh. The match was just like a festive for the Indian fans as everybody wanted to see their star players playing with different ball i.e. Pink Ball. The match was played at the Eden Gardens, and the stadium was beautifully organised for the historic event.

Moreover, the match was not that much interesting as India defeated Bangladesh one-sided. Meanwhile, Team India after defeating Bangladesh in the Test Series by 2-0, remained still at the top of the World Test Championship’s points table. Indian team is leading the points table with 360 points and no other team is nearby India in the points table. Australia is in second position with 116 points. However, Team India still have to play Test series against the big teams outside India.

Upon looking, India’s grand opening in the Day/Night Test match, every team wants to play with India. Even Australia is hoping for a Day/Night Test against India as earlier their captain Tim Paine gave hint during the press conference and now Shane Warne Asked form BCCI president Sourav Ganguly about D/N Test. Actually, BCCI president has posted pictures over the twitter handle. And upon which Australian former cricketer Shane Warne comes up with a reply to congratulate India and also hoping for a D/N test match between India and Australia.

Former legendary spinner wrote, ” Congrats to you and @imVkohli on agreeing to play a day/night test. I hope there’s another one next summer in Adelaide when India tour Australia on @FoxCricket – Would be amazing buddy !”

Congrats to you and @imVkohli on agreeing to play a day / night test. I hope there’s another one next summer in Adelaide when India tour Australia on @FoxCricket – Would be amazing buddy ! 👍 https://t.co/gNY95A3MU2

Thereafter, BCCI president Sourav Ganguly while addressing media said, “I am sure he has got a hint by what he has seen in this game but it’s a decision everyone has to take and let’s see how it goes,” Sourav replied while addressing the media after India’s win at Eden Gardens.