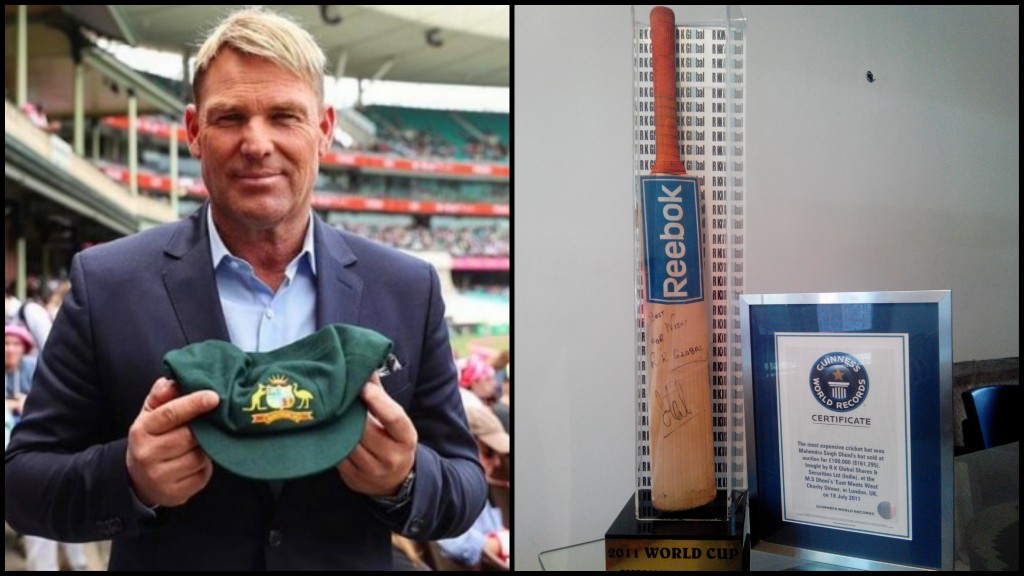 The cap of Legendary leg-spinner Shane Warne which he wore throughout his career becomes the most expensive cricket memorabilia of all time. Warne’s green baggy is currently being auctioned online for raising fund to help those who have been affected by the bushfire in Australia.

Shane Warne’s cap got a great response in the bidding war as in the first two hours, the price of the cap reached $275,000. At the time of posting this article, the bid was reached whopping $520,500. Less than 12 hours are left in the auction. This bid has broken the records of Sir Don Bradman’s green baggy and MS Dhoni’s bat which he used in 2011 World Cup Final.

Previously, Bradman’s cap which he wore in his last test was the most expensive cricket memorabilia. In 2013, the green baggy of the greatest batsman in cricket history was auctioned for 425,000 Australian dollars.

Before Bradman’s cap, the record was held by MS Dhoni’s bat with which he played 2011 World Cup winning knock. In an auction in London in 2011, Dhoni’s bat got a bid of 72 lakh which is equivalent to 147,000 Australian dollars. The aim was to raise funds for Dhoni’s wife’s charitable organisation – Sakshi Foundation – that works for under-privileged children in India. The bat was bought by R K Global Shares & Securities Ltd (India) in London.

Now, the cap of Shane Warne has took over both Bradman and Dhoni’s memorabilia. Shane Warne had urged everyone to helped bushfire affected people. Warne wrote, “Everyone is in this together and we continue to find ways to contribute and help on a daily basis. This has lead me to auction of my beloved baggy green cap (350) that I wore throughout my test career (when I wasn’t wearing my white floppy hat),”