Indian cricketers seems to be having a knack of poking fun at each other leaving fellow cricketers and fans amused through their sense of humor. Yuzvendra Chahal seems to be one who caught the attention of many through his hilarious responses. However, Chahal’s recent response to a ‘hair grown’ comment backfired and he was left hilariously trolled by teammate Shikhar Dhawan.

Sunny Dubai bringing out the smiles 🌞

It all started with fellow spinner Kuldeep Yadav commented on a post from Shikhar Dhawan. The comment from Kuldeep was referred to Shikhar’s grown hair as seen in the post. “Baal aa gaye h ab to” – was Kuldeep’s response on the post. 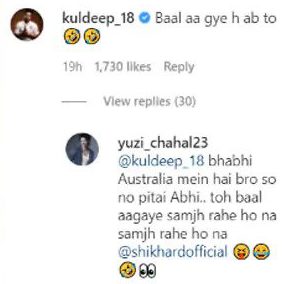 Seeing an opportunity to engage in some friendly banter, Yuzvendra Chahal in an instant left a comment in his own hilarious stance. As per Chahal, a reasoning behind Dhawan’s so picked ‘grown hair’ was his wife not being around. Chahal’s cheeky dig at the left-hander backfired through a hilarious response from Dhawan. In a friendly warning to the spinner, Dhawan said – “I have been in marriage for years but you have recently got engaged, so be careful of your front teeth or else risk losing them.” 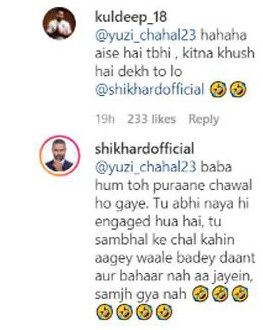 It was smart humor on part of Dhawan whose response left fans in a frenzy. Likes and comments began to pour with many even trolling Chahal for being at the receiving end of humor this time.

All Eyes On The IPL

With the reschedule Indian Premier League finally set to begin in September, both Chahal and Dhawan would be eye top honours for their respective franchises. While Chahal was the top performer with the ball for his side (Royal Challengers Bangalore), Dhawan had an exceptional run with the bat for Delhi Capitals.

The 13th edition of the Indian Premier League is set to kick-off from September 19.