The KKR captain's statement after the win over Mumbai Indians has Venky Mysore on the receiving end. 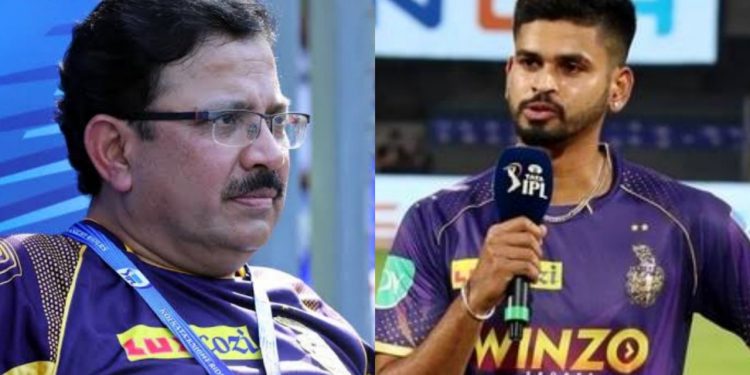 Kolkata Knight Riders might have accomplished an extremely clutch feat of defeating Mumbai Indians twice in a season; but that is, by no means, an indication of the overall problems present in their side.

KKR’s qualification hopes are all but over after enduring a five-match losing streak after making a strong start to the tournament. Barring captain Shreyas Iyer and a few other senior players, none of the players seem to have their positions fixed in the team. Shreyas’ form and technique itself has been found desperately wanting at times.

However, the most recent addition in KKR’s long-growing list of problems stems from a statement captain Shreyas made after the team’s 52-run victory against Mumbai on Monday night. Talking about the team’s inability to find stability and the constant chopping and changing they’ve done throughout this season, Shreyas candidly explained the process that goes on behind implementing those changes in the playing XI.

And while he admitted that confronting underperforming players is a difficult task, the KKR management- a group comprising of Shreyas himself, coach Brendon McCullum, and KKR’s Chief Executive Officer, Venky Mysore-are all very much involved in the decision making process.

“It is really difficult because I was also in that position once when I started playing the IPL. We discussed with the coaches and obviously, the CEO is also involved in team selection so especially, Baz (Brendon McCullum), he goes to the players and tells them. To be honest, all of them are very supportive of the decision making and the way they turn up to the ground and support each and every individual, it is something to be proud of as captain and I am really happy with how we played today,” Shreyas was heard saying at the post-match presentation.

The candid and upfront nature of Shreyas’ comments delineating the selection thought process, however, copped a lot of criticism from fans on social media. A major gripe among these fans was that the KKR CEO, a person with limited on-field decision making experience, is being entrusted with such a key role in the team’s selection. Some, in fact, directly blamed KKR’s inconsistent team combination problems this season to Venky Mysore’s involvement in the team selection process.

WATCH VIDEO: KKR batsmen steal a single as Ishan Kishan loses his sight of the ball

Meanwhile, another section of fans admired Shreyas’ honesty upfront and lauded him for ‘exposing’ Mysore and McCullum’s role in KKR’s team problems. A select few fans even opted to defend the likes of Mysore and McCullum, who’ve been associated with the Knight Riders’ family for a long time now. Here are some of the most iconic social media reactions to Shreyas Iyer’s post-match commentaries:

Interesting from Shreyas Iyer. Casually drops this: "obviously the CEO is also involved in team selection".cricketing decisions should be left with cricketers not ceo. That’s why you are in this states#. Struggling to find combination. @KKRiders

Really like courage of Shreyas Iyer exposing CEO who is responsible for team selections. Because it’s definitely not the reflection of his captaincy skills when he was leading DC. BAZ & venky Mysore spoiled this team.

Brendon McCullum after the win against RR – I'm not someone who likes to chop and change much. I like to give selection loyalties and back the player for 1 or 2 more games than they expect
Yesterday shreyas Iyer says there is involvement of ceo in the team selection #IPL2022 #kkr

As CEO, @VenkyMysore didn't release Nagarkoti,Mavi for 2 Year when they were injured nd Russell when he was banned(2017)

Becoz ShReYaS IyEr HaS NoT MuCh SaY In TeAm SeLeCtIoN😂

That's a huge, huge statement and very disappointing to hear. That's definitely not what a player would want to hear…#KKRvsMI