The display of Warner's amazing reflexes resulted in the wicket of Sri Lankan skipper Dimuth Karunaratne. 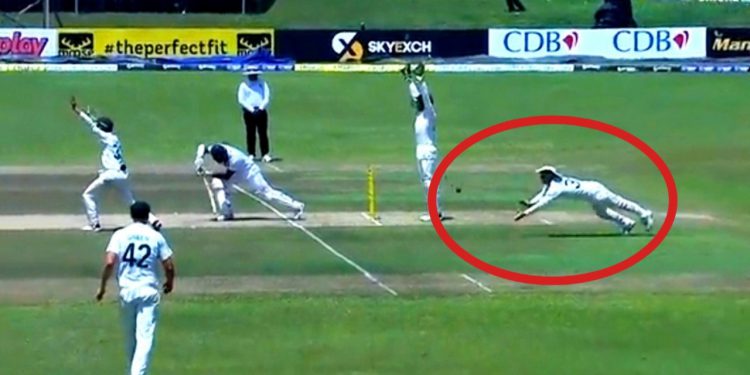 Team Australia is currently touring Sri Lanka and after the culmination of the T20I and ODI series, the teams are facing each other in the longest format of the game. The first Test of the tour went underway today with Sri Lanka opting to bat first. The SL vs AUS Test series will have two Tests, one of which is currently being played in Galle and witnessed a brilliant fielding display by David Warner on the first day itself.

The Sri Lankan captain Dimuth Karunaratne invited the Aussies to bowl first and the Australian bowlers rattled the Sri Lankan batting line-up. While the Aussie bowlers dominated the Sri Lankan batters, there was one moment in the SL vs AUS game involving David Warner which became the highlight of the first day. The Aussie southpaw displayed great reflexes while the other players were busy appealing for LBW.

The moment in the SL vs AUS game came in the 30th over of the Sri Lankan inning when Nathan Lyon was bowling to SL skipper Dimuth Karunaratne. Lyon bowled a delivery from round the wicket which Karunaratne tried to push. The ball took the inside edge of the bat and went towards gully where an agile Warner leapt up and completed a one-handed stunner.

Everyone went up for LBW.. David Warner kept his eye on the prize and took an absolute ripper! #SLvAUS pic.twitter.com/f7cdguPs39

Interestingly, all the other Aussie players went up in an appeal for an LBW but Warner was watching the ball closely which resulted in the wicket of the SL skipper. The Sri Lankan team was wrapped up by the Aussie bowlers on just 212. At the time of writing this article, the 3rd session of the first day is underway and the Australian openers have notched-up 41 runs. The second Test of SL vs AUS series will be played from 08th July to 12th July