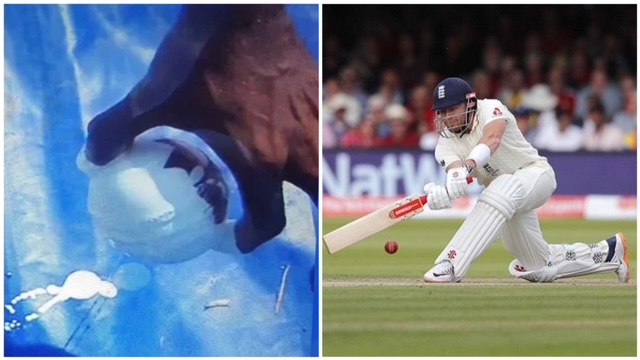 On Monday, England cricket team comfortably clinched the SL vs Eng test series by 2-0 after crushing hosts in the second test match by 6 wickets. With this big win England is now as looking well deserving candidate for the final of the ongoing ICC World Test Championship 2020-21. However, this is not only thing which grabbed the headlines but also Jonny Bairstow’s one big hit video which is getting viral over Internet Platform.

In the second test match of the SL vs Eng test series, hosts after winning the toss put a good total of 381 on the board, thanks to Mathews’ 110 and Dickwella’s 92 runs. In the reply, England team scored 344 runs before getting all out in the first innings. Joe Root played 186 runs knock and helped his team to reduce the trail.

Thereafter, in the second innings Sri Lankan batting collapsed and they manage to score only 126 runs. Dom Bess and Jack Leach took Jo4-4 wickets each with their extra-ordinary performance. Chasing 164 runs in the fourth innings of the match at the Galle Cricket stadium was not looking a big deal for the visiting team. And hence they comfortably chased the score and won the match by 6 wickets.

During the second test match between Sri Lanka and England at the Galle Cricket Stadium, a incident took place which grabbed the headlines. Actually, in the 10th over, Jonny Bairstow hit a stunning six and the ball landed in a bucket full of paint which made it impossible to use it again for the match. Hence, umpire had to replace the ball and Sri Lanka bowlers got almost a new ball. Here we are attaching the video of the same incident below.

Now England team will travel to India for 4 matches test series, 5 matches T20Is and 3 matches ODIs series. India vs England series will lock its horn on February 5 with the first test match at the MA Chidambaram Stadium in Chennai.