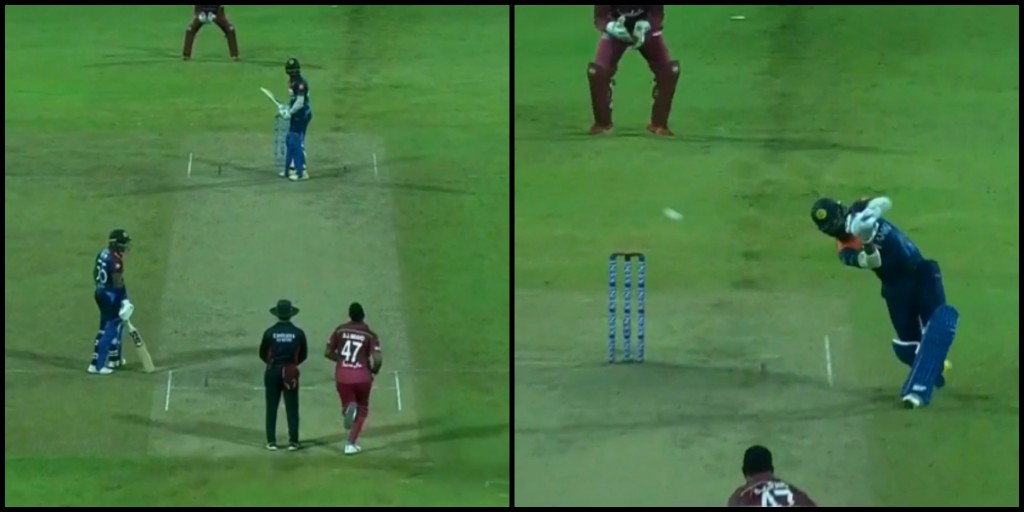 SL vs WI T20 series is currently underway. In 1st T20, visitors beat Lasith Malinga-led Sri Lanka by 25 runs and gained a 1-0 lead in 3-match series. DJ Bravo who had announced his international retirement in 2018 is making his return to the West Indies through this series. Bravo didn’t have a great comeback but it wasn’t bad as well though.

During the SL vs WI 1st T20, Bravo and viewers were left amazed by an unusual shot of Wanidu Hasaranga. The incident happened during the 15th over of the innings. Sri Lankans were chasing a mammoth 196 and the pressure of increasing strike rate was building on them. Wanidu Hasaranhga and a well set Kusal Perera were at the crease.

Meanwhile, during 15th over, Hasaranga created room to play a shot over the cover. However, the West Indies all-rounder followed the feet movement of the batsman, bowled a yorker at the blockhole and diminished the room. But the batsman kept moving his feet and managed to hit the shot reaching outside the pitch. Both batsmen completed and single and amid this Bravo was seen smiling. The execution of Wanidu Hasaranga had left the 36-year old amazed. Below is the video of the incident.

However, the home side couldn’t end up on the winnings side on the day. The early collapse made by Oshane Thomas put Sri Lanka in deep trouble. Thomas picked 5 wickets in his first three overs and at a time hosts were 56 per 5. Perera and Hasaranga put together an 87-run partnership for the 6th wicket.

The wickets of Hasaranga and Perera was the turning point of the game. It was an easy task for the Windies player to get rid of the tailenders. Sri Lanka was all-out at 171 and lost the first SL vs WI T20 match by 25 runs. The final T20 of the 2-match series is scheduled to play on 6 March at the Pallekele stadium.