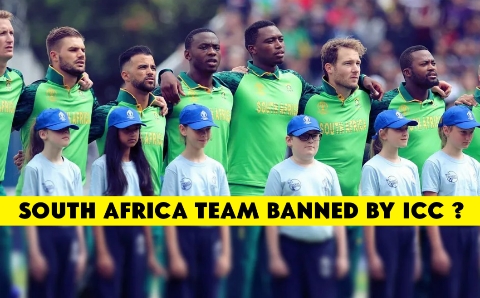 In what happens to be a piece of shocking news for South African cricket, the South African Sports Confederation and Olympic Committee (SASCOC) has dissolved the board of Cricket South Africa (CSA) due to maladministration and malpractice. As per the reports, the ban is for one month, while SASCOC will investigate the matter. Well, the news brings us amidst a big question. Does the investigation imply South Africa team is banned from international cricket? Well, we will divulge in the question further in this article.

SASCOC chief executive Ravi Govender said the extreme step is “to remove the negativity and governance issues around CSA. So that in future they can be more effective and efficient in their mandate”.

Continuing with his statement, Govender said “We are deeply concerned about the issues that have been permeating around CSA recently. “We met with the board and requested sight of the elusive forensic report, which has not been forthcoming. We have asked the board to step aside so that we can implement a task team to look into their actions and report back to us within one month.”

CSA has faced heavy flack from the sponsors over governance concerns. Recently, 30 commanding players from the men’s and women’s national teams endorsed a harsh word. It reprimanded the board for deferring CSA’s Annual General Meeting that was on 5th September.

“The ICC have also expressed some concerns (about the running of CSA). We believe our decision is warranted, and that it will be embraced by the ICC,” Ravi Govender said.

“The decision we are taking is in line with constitutional provisions and the ICC respect the fact that we are the macro body. Obviously, when it comes to the outcomes reported by the task team, we will consult with the ICC”, he concluded

Also, various reports suggest that this incident could lead to their exit from the game at the international level. This move could fall four of the ICC’s rules on government interference. Based on the same, South Africa could face an exit from the game.