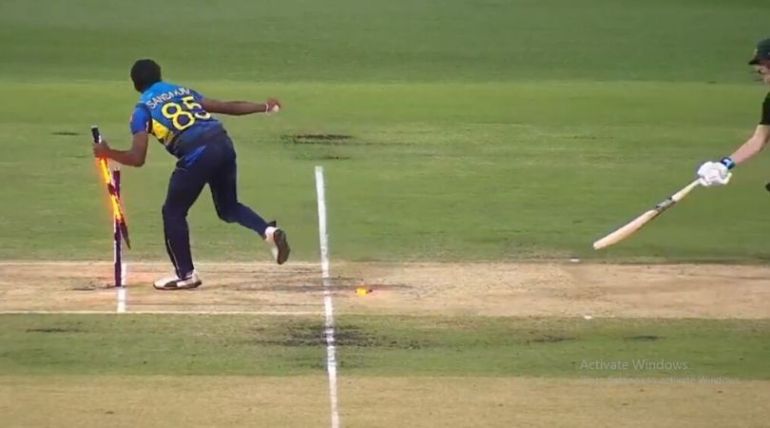 On Wednesday, an underpressure Sri Lanka team took Australia in the 2nd T20I match of the series. There was a pressure on Sri Lanka team to keep themselves alive in the series after a humiliating 134 runs loss in 1st T20I. However, Sri Lankan side once again fell flat against the mighty Australian side. While batting first Sri Lanka all-out on 117 runs in 19 overs. Australia chased the target in 13 overs with David Warner and Steve Smith completing their fifties.

During the Australia innings, Sri Lanka bowler Lakshan Sandakan made a blunder and missed an easy run-out of Steve Smith at the bowling end. It all happened during the 13th over when the match was almost over for the visitors. David Warner played a delivery back to the bowler and it hit the stumps.

Non-striker Steve Smith was walking outside the crease. The bowler had enough time to run-out the batsman but as the bails were already dislodged, the bowler had to uproot the stump holding ball on the same hand. But Sandakan uprooted the stump with one hand and the ball was in his other hand. Sri Lanka bowler realised his mistake but it was too late as Smith of Australia had made their way to the crease.

Sandakan had a golden opportunity to run out Smith! #AUSvSL pic.twitter.com/E7AsOwEjSJ

Interestingly, in this match, Pat Cummins ran Lakshan Sandakan out the same way, but unlike Sandakan his actions were clean.

Quick thinking from the big quick Patty Cummins! He yanks out the stump to execute the run out!#AUSvSL | @bet365_aus pic.twitter.com/hUXukPMHT7

After Sri Lanka captain Lasith Malinga won the toss and chose to bat, the visitors were bundled out for 117 in 19 overs. Barring Kane Richardson, each one of Adam Zampa, Billy Stanlake, Ashton Agar and Pat Cummins dismissed two batsmen each.

After Australia captain Aaron Finch (0) dismissed on the first ball by his counterpart, Warner (60 not out) and Smith (53 not out) stitched a match-winning 117-run partnership to win the match in 13 overs.