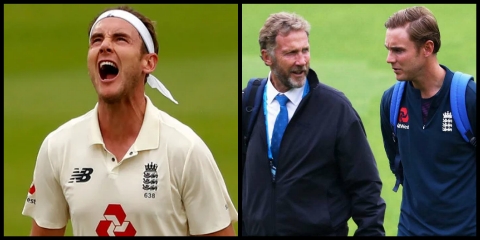 In England vs Pakistan 1st test match, Chris Broad, father of Stuart Broad was the match referee. Normally, an official can’t work in the same match in which their family member is playing. But due to travel restrictions during the pandemic, ICC allowed Chris Broad to officiate 3-match test series in which his son is playing. However, this didn’t turn good for the pacer as his father took the parenting to a whole new level.

Stuart Broad fined by his father for using inappropriate language after dismissing Yasir Shah. Chris didn’t like his son’s behaviour and penalised him with 15% of his match fees which is 2000 pounds and almost 2 lakh in Indian rupees. The paceman also received 1 demerit point for breaching the ICC code of conduct. This is the third demerit point for Stuart Broad in 24 months. So one demerit point and Broad will face a ban for one match.

Netizens hailed Chris’s decision and appreciated his honesty towards work. Broad admitted the offence and accepted the sanction proposed by his father. However, the bowler with 507 test wickets came up with a cheeky response on Twitter. The bowler is not going to give any present to his father on Christmas. Broad hilariously tweeted, “He’s off the Christmas card & present list”

Who Is Stuart Broad Father?

Unlike his son, Chris Broad was a batsman who has represented England in both tests and ODIs. In 3-year of international career, he played 59 matches and aggregated 3022 runs. He is regarded as a legend in the domestic level he has scored over 21,889 runs with 50 centuries in the first-class cricket.

Chris Broad has been working as ICC match referee since 2003. He is a survivor of 2009 attack on Sri Lanka cricket team in Lahore. He was in a convoy of vehicles that was attacked by terrorists. Luckily, he escaped unharmed in the attack.