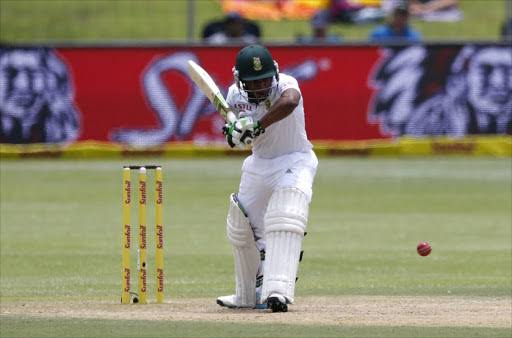 The first test match at the Centurion between South Africa and Sri Lanka witnessed a rather unusual turn of events. South African batsman Temba Bavuma returned back to the pavillion even after replays showed he wasn’t dismissed. What amused many is that Bavuma did not even wait for the onfield umpire to raise his finger, and began his walk back.

Bavuma Walks Back Despite Been Not Out
During the South African innings, South African had just managed to go past Sri Lanka’s first innings score with captain Faf du Plessis and Temba Bavuma well set. What followed was an uncertain dismissal, or we’d rather call it not! Temba Bavuma had tried to cut Sri Lankan pacer Dasun Shanaka but had knicked it back to the keeper. In an instant, Bavuma started his walk back to the pavillion. It was only when television replays showed Bavuma hadn’t knicked the ball. Even ultra edge confirmed the batsman had missed the ball, thereby revealing no contact between bat and ball.

Bavuma Explains What He Thought Was A Dismissal

“I heard a sound”. Temba Bavuma explained of his ‘dismissal’ and the bizarre walk back to the pavillion which left fans on social media fuming. Bavuma was batting on 71 and well set for a big score when he felt he had knicked a ball from Sri Lanka pacer Shanaka. “My first instinct was to walk and then obviously when I saw on the highlights, there was daylight between bat and ball.”, Bavuma added. Further on, it was too late of him to get back even after replays showed he wasn’t dismissed but he had already taken off his pads off.

Why did Bavuma walked into dressing room, look at the gap. pic.twitter.com/2zkvffaxOB

South Africa Pile on 621 in Their First Innings
Riding on a well stroked 199 by skipper Faf du Plessis and useful contributions from the top and lower order batsmen, South Africa piled on a huge 621 runs in their first innings in response to Sri Lanka’s 396. Du Plessis fell short of a well-deserved double hundred as he looked to go over the top but picked out the fielder at mid-on – a dissappointing end. At the end of the third day’s play, Sri Lanka were 65/2.