Mohammad Hasnain was asked to work on his action in the beginning of this year and was allowed to bowl only after modification. 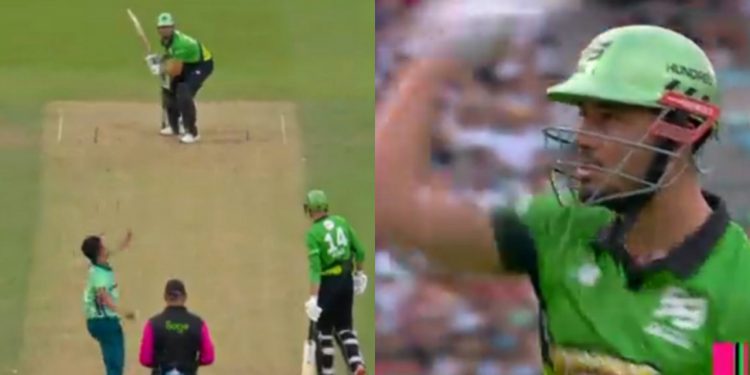 The Hundred 2022 kickstarted earlier this month with the clash between Southern Brave and Welsh Fire with the former starting their season with a victory. 14 matches have been played so far and the tournament has picked up a great pace. However, the 14th match of the league between Oval Invincibles and Souther Brave is in the news for a reason that the teams and the authorities wouldn’t like.

Mohammad Hasnain has been providing his services for Oval Invincibles in The Hundred 2022, but the Pakistani bowler has had his share of struggle as far as his bowling action is concerned. He was even asked to work on his action in the beginning of this year and it was only after modification in his action was he allowed to bowl again. Interestingly, after the 14th match of The Hundred, Marcus Stoinis accused the Pakistan pacer of chucking.

The accusation by Stoinis came on the 61st delivery of the Southern Brave when Mohammad Hasnain bowled a bouncer to which Stoinis got out. Hasnain banged the ball in short which Stoinis tried to flat-bat down the ground, but the ball went up in the air which brought the end of Stoinis’ inning. While going back to the pavilion, Stoinis imitated Hasnain’s action which looked like the bowler had chucked. The gestures by Stoinis created quite a furore as many thought that Stoinis’ reaction was not appropriate.

This is the video of Mohammmad Husnain bowling to Marcus Stoinis and Stoinis signalling that Husnain is chucking.
This is disrespectful from him#Stoinis#Husnain#hundred pic.twitter.com/YXmxzF9tj8

Disappointing reaction from Marcus Stoinis after he was dismissed by Mohammad Hasnain. How about sticking to playing cricket and letting the officials do their job #TheHundred #Cricket pic.twitter.com/oYOSb12GTr

Reports: CSK & Ravindra Jadeja out of touch since the end of IPL 2022; all-rounder’s separation from Chennai team almost certain

As for the 14th game of The Hundred 2022, Oval Invincibles won the contest quite easily by 7 wickets. The team had opted to bowl first after winning the toss and restricted Southern Brave to an average score of 137. The Oval Invincibles batsmen made light work of the chase as they cruised to victory in just 82 deliveries with 7 wickets in hand. With the victory, Oval Invincibles have moved up to the second position on the points table.