While India lost the match, the former Indian captain has been receiving backlash for his act during the National Anthem. 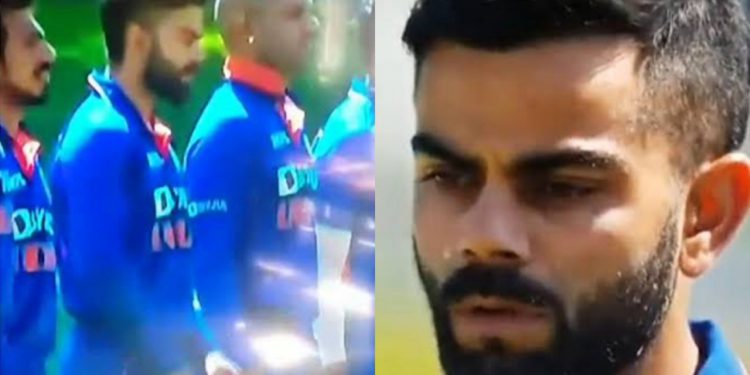 South Africa completed a clean-sweep against India in the ODI series as they won a thriller on 23rd January against the visitors. The game swung like a pendulum and in the end, it was South Africa that came out victorious.

Though the Indian loss is the talk of the town, there is one other issue that has got the netizens talking. The netizens criticize Virat Kohli for disrespecting the National Anthem.

After their victory in the first Test, the Indian team didn’t win any contest against the Proteas as they lost 5 games on the trot; 2 Tests and 3 ODIs. While a section is critical of the team for the ODI series loss, Netizens criticize Virat Kohli for apparently being disrespectful to the National Anthem. The former Indian captain was caught on camera while doing an act that has infuriated the netizens.

Virat Kohli busy chewing something while National Anthem is playing. Ambassador of the nation.@BCCI pic.twitter.com/FiOA9roEkv

Before the start of the game, both the teams stood in line for the customary National Anthems. As the Indian Anthem was playing, the camera focussed on Kohli who seemed lost and was chewing gum during the National Anthem. This made the Indian fans quite furious and the Netizens criticize Virat Kohli for the same. The former captain has been trolled brutally by the fans and has received backlash for the act.

As for the match, it turned out to be quite a thriller with the pendulum swinging from one team to the other. After the loss of 5 Indian wickets, it looked like the Proteas will easily win the match, but Deepak Chahar’s sensational half-century brought the Indian team back into the game, however he got out soon after it. At the end, only the bowlers were left and couldn’t accomplish the task of taking the team to the victory.