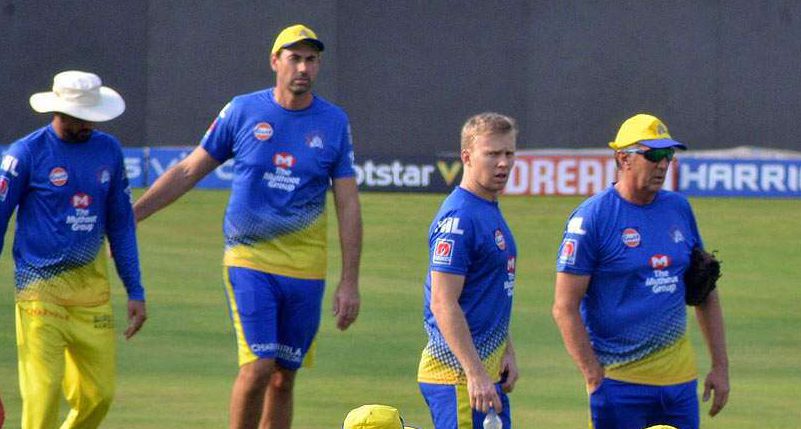 Suresh Raina’s departure from the 13th edition of the Indian Premier League came as a shocking news for the camp and the fans alike. The star CSK batsman pulled out of the tournament citing personal reasons. Suresh Raina has been one of the most consistent players for the franchise and has performed really well for them.

Raina is known as Mr. IPL owing to his tremendous record in the league and the most number of appearances in the IPL matches. One would think it would be a difficult task for the team to find a replacement for such a great player, but it seems like they have already come up with a solution.

According to Laxman Sivaramkrishnan, MS Dhoni will most likely promote the England all-rounder Sam Curran to No. 3 to fill Raina’s place. Curran has performed pretty well in the previous seasons of the tournament and has proved that he can be quite handy both with bat and ball.

“He can bat at No. 3 and give CSK those useful runs. Over the years, we have also seen Dhoni preferring left-arm pacers. Curran can come in handy since he can swing the ball in the air and is a very enthusiastic fielder,” Siva told the Times of India.

The former leg-spinner also said that Curran could come in as a pinch hitter and boost the team’s run-rate. He can also use the field restrictions to his advantage if a wicket falls early. Curran represented the Kings XI Punjab in the last year’s IPL and hit a sizzling half century. His performance with the ball was also appealing as he went on to take a hat-trick against Delhi Capitals.

His all-round performances have earned him a good place and he was bought for a huge amount of 5.5 crore in the IPL 2020 auction. One very big advantage of having Curran in the place of Raina is that he is also a left-hander. He could easily handle the leg-spinners in the absence of Suresh Raina. His inclusion gives the CSK camp a chance to experiment by sending him up the order.

“In T20s, most teams employ leg spinners to trouble the right-handers. But then, a left-hander could negotiate with leggies easily. So, the loss of such an established batsman like Raina would hurt CSK. But they have a utility player in Curran and could send the southpaw up the order,” Siva added.

Currently the team is in extended quarantine till September 1, after 13 members of the camp were tested Corona positive. They are yet to hit the grounds and start their pre-season camp. This development has forced the authorities to keep the IPL 2020 schedule on hold.