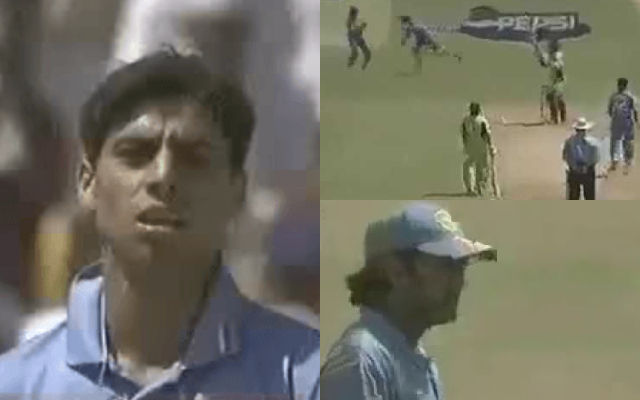 Anecdotes and leisurely discussions have become a popular source of entertainment during the ongoing lockdown-period. Former India fast bowler Ashish Nehra; now operating as a care-free cricket analyst in his post-retirement days; recently decided to pitch in with one of his own on-field incidents. An incident, which, by his own admission, happens to be rather infamously popular on social media.

Nehra narrates the background behind his aggressive on-field behaviour towards MS Dhoni, in one of team India’s ODI matches against Pakistan. More specifically, the 4th ODI of Pakistan’s 2005 tour of India, played at Ahmedabad. Not to be mistaken with the second ODI at Vishakhapatnam, as Nehra reminds. “People assume it’s from the Vizag match, but that incident is actually from the fourth ODI in Ahmedabad.”

After putting up a strong 315-run total on board, the Indian bowling attack had provided a solid start to the hosts’ target defence; creating several chances within the opening overs of Pakistan’s innings. Unfortunately, though, the team’s fielding unit didn’t seem to be operating at its optimal-best; and couldn’t really hold on to the breakthrough-chances the bowlers produced.

Case in point being, a sloppy fielding effort combined from wicket-keeper MS Dhoni and vice-captain Rahul Dravid at slip. Pakistan’s ‘Boom-Boom’ Shahid Afridi had just clobbered Nehra for a six in his previous delivery. Determined to exact vengeance, Nehra steamed in with a fullish-length delivery. Afridi cut- only to mistime, and get a sharp-nick on the ball; as Dhoni made a sideways leap to collect a relatively comfortable catch- only to end up failing. The ball sailed past Dhoni, and Dravid stationed at second-slip, while a visibly animated Nehra delivered them a rather obscene piece of his mind.

“Not proud of my behaviour towards Rahul and MS”- Ashish Nehra

“Six off the last ball, on top of that a high-pressure India-Pakistan match. I created a chance that went to waste. I lost my cool; not the only incident that happened while I was in the squad, but still, I was pretty angry,” Nehra recently explained to a ToI interviewer. At the time of the incident, MS Dhoni, the cult icon of Indian cricket as fans now recognize; had made less than 10-appearances for the men in blue. Looking back on how Dhoni and Dravid reacted, Ashish further revealed, “Both Dravid and Dhoni were fine with me after the game but that doesn’t justify my behaviour.”

Afridi- earning a lucky reprieve on 10 runs, finished with a 40-run cameo of 23-balls, as Pakistan chased down the target with 3-wickets to spare. Nehra, meanwhile, stayed wicketless from his 9-over spell, giving away 75-runs. Following from their victory in the last match at Jamshedpur, the visitors continued on with their winning momentum, and ultimately, won the 6-match series 4-2.

Nehra further attributed the video’s popularity to the presence of Dhoni. He likens the situation to a similar image, which featured present team India captain Virat Kohli in his childhood days. “The video is still popular because it has Dhoni in it. It’s like that old picture of me presenting an award to Virat when he was a kid. The picture is famous because it has Kohli in it, not because of me,” he explained.

In his characteristic ‘mast’ fashion, Nehra ‘Ji’ comically concludes about the implications the video could have on his kids someday. “I know someday my kids will eventually watch that video clip and I’ll have to explain why I behaved that way!”