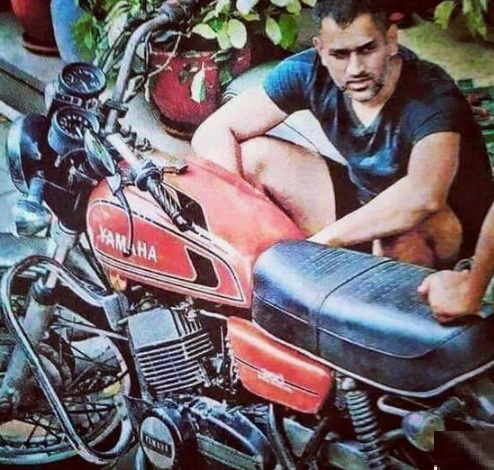 Cricket fans are aware of Mahendra Singh Dhoni’s love affair with high-end motorbikes and cars and his passion to have a collection of them all. Right from the Suzuki Shogun to the Kawasaki Ninja H2, Dhoni’s collection boasts most of them. Well, to those who are unaware of his very first prized possession, it was a Yamaha Rajdoot. And for a change Dhoni flaunted his mechanical side by completely opening up the bike.

Dhoni Restores His Prized Possession
The bike which he claims was the very first one he owned was purchase for a sum of rupees 4500. It’s a piece which he hold near to his heart and one which he restored by dismantling it himself. It was a while that Dhoni had hinted to this fans about the restoration that he was looking at carrying out. “I think my plan of action is to restore the 1st bike tht I bought for Rs. 4,500, …its in a very bad shape”, he’d tweeted.

I think my plan of action is to restore the 1st bike tht I bought for rs4500, will upload its pic maybe tomorrow.its in a very bad shape

Fans Get a Glimpse Of The Dismantled Bike
As part of the restoration, Dhoni decided to open up the bike himself. Something that he did manage and even posted pics of it on twitter. Even in pieces, fans got a glimpse of Dhoni’s first bike and the efforts he’d put in to dismantle it. But as easy as the dismantling sound, the restoration is tougher. Dhoni expressed it, ‘…I don’t know who will assemble it but it was fun taking it apart.’

Well that some effort from the former captain in expressing his fetish for bikes.