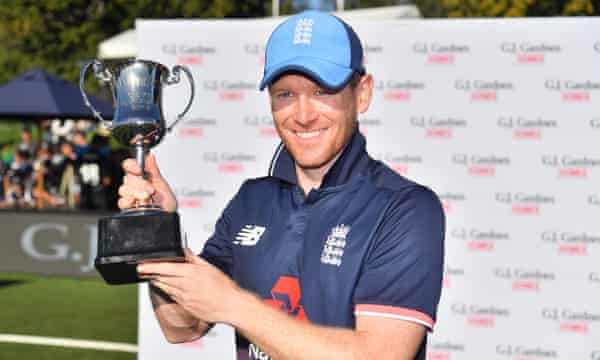 Humor and cricket have always gone hand in hand- a quick browse through some of the ‘funniest’ catches, shots, or reaction videos on YouTube is enough to make that point. In the end, though, the Gentlemen’s game is all about glory, pride…and the accolades that accompany those virtues. Except, at times- the said accolades don’t inspire as much pride in their recipients- as they kindle the creativity inside of meme-makers!

Today’s throwback reel features a light-hearted compilation of five such instances; where the Man of the Match/Series awards up for grabs left both the players and their fans, scratching their heads. Worth noting, that we’ve centered our picks around some of the more recent presentation ceremonies. Covering some of the pre-21st century mementos; like a champagne bottle an 18-year-old Sachin Tendulkar received back in 1990, or Allan Donald’s famous ‘Jewellery case’ from 1996- warrants a separate list. Nowadays, players usually get cash-cheques or certificates from the match-sponsors. But every now and then, that trend is bucked around with, and we get to some really interesting prizes. So without further ado, here’s our list:

Back when he was an active-cricketer, English all-rounder Luke Wright had quite a reputation as a ‘T20 mercenary’; thanks to his blistering batting performances in foreign leagues all across the globe. It was during one such stint for the Abhanai team in the erstwhile Dhaka Premier Division Cricket League in 2013, where his on-field brilliance fetched him the MOTM title in a game. But the title wasn’t merely ceremonial- the presenters had an actual, physical memento to offer, that being (drum rolls)… a blender! Obviously, the comedy of the situation wasn’t lost on fans, who thoroughly enjoyed the look of bemusement on Wright’s face. But the latter sportingly accepted his prize and even made a witty tweet about his one-of-a-kind prize.

2) Speedy Bumrah gets a speedy car

The year 2017 saw Jasprit Bumrah establish himself as the Indian team’s ace fast-bowler. More specifically, it was the 5-match away-ODI series against Sri Lanka that year, where ‘Boom-Boom’ unveiled his most fierce, quick-bowling colors. Bumrah picked 15-wickets across all the matches at a miserly average of 11.27; a performance that, quite unsurprisingly, helped his side register a 5-0 whitewash over the Lankans. And to commemorate his stellar, on-field heroics, the presenters presented him with an interesting gift- although it didn’t take long for him to share it with his teammates. Initially, the Indian team had a good laugh about the interesting choice of gift the Eicher Multix mini-truck made. Once the excitement wore-off, though, MS Dhoni decided to take his fellow mates for a fun-ride across the park.

England captain Eoin Morgan has a knack for producing some of the most valuable cameos under crunch situations. Not too long ago, his sensational last-ball six off Ben-Hilfenhaus in a Big Bash League match had earned him the praise of the ‘perfect finisher’ from his colleague, Pat Cummins. A few years before that, though, Morgan helped his Dhaka Premier League (same event where Luke Wright received a blender) side, Gazi Tank cricketers, get the better of Prime Doleshwar in the finals. Gazi had lost some quick-wickets; and it was courtesy of the English skipper’s 86 that they could eventually register a 70-run win.

Surely, a match-winning effort in such a high-stakes game calls for some classy gift, right? Well, as per the organizers of the tournament, a rice-cooker qualified as classy enough for the MOTM prize! Although to be fair, Morgan did later convey that he wanted to include more rice in his diet, so maybe we’re underselling it? Who knows?

4) Anton Devcich gets a taste of the Caribbean flavor

The Caribbean islands are world-famous for their extravagant and multi-flavored cuisine. The Caribbean Premier League seems eager to further endorse their rich, food-pallette; over the years, the CPL has had several snacks and beverage companies as sponsors- Foska Oats, Carib Brewery, El Dorado Rum being few of them. But they probably went a bit overboard on the culinary side of things during the 2018-edition, where they hired Sunshine Snacks to sponsor their MoTM award hampers. Thankfully, it didn’t leave a bad-taste with Anton Devcich pictured above, who seemed quite happy with his tasty treats.

And finally, the most recent entry on the list has to go to the prizes dished out in the 2019 Gillette Australia India ODI series- an event notoriously infamous for its weird choice(s) of rewards. The Indian team won that series 2-1, and received only 500 dollars as their overall cash-prize. Sounds underwhelming, right? Probably not as underwhelming what local speedster Jhye Richardson had to make do with after winning MoTM. The promising, 22-year-old made an impression in the first game of the series itself; picking up 4-wickets for only 26-runs- including the prized scalp of captain Virat Kohli.

And for all his brilliance, all the organizers had to present him was- a rainbow-patterned bat-grip, and shoelaces! Now granted, some of the prize money went to charitable organizations, hence they had to make some cuts. But the ridiculousness of the prize(s) sure did amuse the fans, who had some hilarious insights to offer.

Exciting quick Jhye Richardson is the @GilletteAU Player of the Match with his 4-26 from 10 overs! #AUSvIND pic.twitter.com/EtQ3heBrsA

Interesting to see 'a bat grip and shoe laces' being given to the Man of the Match as a prize in an international match.🤔😂😂😂

This is ridiculous!#AUSvIND #INDvAUS #Richardson #MoM