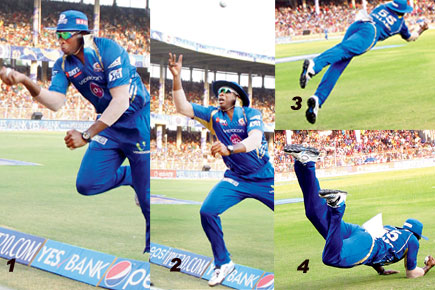 Our ride though the flashback-reels of the grand Indian Premier League continues; as today, we feature one of the most sensational catches in the tournament’s history. When it comes to fielding, few boast of a record as flamboyant as that of the West Indies’ Kieron Pollard. Case in point here being, his stunning catch off Kevon Cooper in Mumbai Indians’ 2014’s IPL match against the Rajasthan Royals.

Back at the time, the match held quite a bit of context for every passionate member of the MI-paltan. Having only won 3-out of their first 10-games; the 2013-defending champs had entered into a precarious do-or-die situation. To be fair, historically, the Rohit- Sharma led side has always delivered their best performances with their backs against the walls; nonetheless, a loss against RR in their eleventh-match almost certainly implied elimination.

MI batsmen lay a solid foundation towards the team’s  ‘Go-Elimination!’ endeavor- openers Lendl Simmons and Michael Hussey each starred with a half-century apiece. Skipper Rohit’s quickfire 40-run cameo of 19-deliveries tallied MI’s total up to a strong score of 178. Left-arm spinner Ankit Sharma turned out to be RR’s only wicket-taking bowler of the evening with figures of 4-0-23-2.

In response, Rajasthan started off their chase on a rather-shaky note, losing 3-wickets in the powerplay. Karun Nair and Kevon Cooper tried to start a recovery act; but Pollard didn’t allow the partnership to foster any more than 19-runs with his Cooper’s stunning wicket. Well, technically, Harbhajan Singh claimed the wicket; but can you really blame us here, though?  A pulled-back, shortish delivery from Bhajji; Cooper hurls the ball over long-on, seemingly unbeknownst of Pollard’s presence in the area.

It wasn’t all sugar though, the catch. First, Pollard jumps to extend his tall right-arm to stop the ball. The subsequent momentum hurls him back- one, two, and three steps before he stoops inside the boundary-ropes; lobbing the ball just-in-time before a diving into the ring. In less than just about a second’s reaction time- don’t let the video’s slowed-down speed deceive you- he regains his balance, and dives yet again; this time away from the ropes- to complete a spectacular catch. The on-field umpires conducted a number of close-inspections to ascertain if at any point, there had been a contact with the boundary rope. Upon confirmation, the on-screen board’s display perfectly summed-up the crowd’s mood.

Despite a gritty 48-from Karun Nair, and some counter-attack from Brad Hodge and James Faulkner lower-down the order; the home side fell 25-runs short of their target, as Mumbai completed a fine victory at Ahmedabad’s Sardar Patel Stadium. With figures of 4-0-13-2, Harbhajan emerged as the pick of Mumbai’s bowlers.