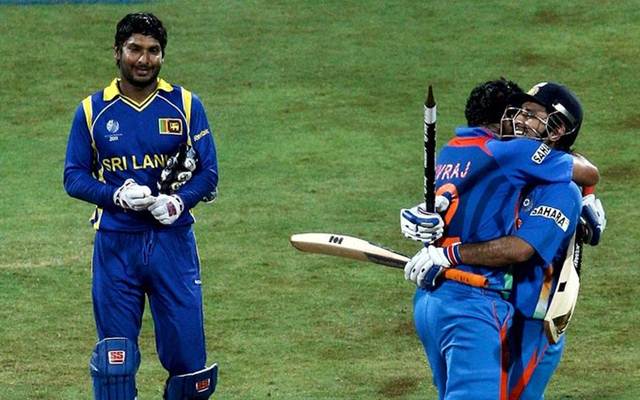 ‘India lift the World Cup after 28 long years, Dhoni finishes it off in style…’. A melody to every Indian cricket fan’s ears; Ravi Shastri’s famous piece of commentary that summed up the entire country’s on the night of 2nd August 2011. The day MS Dhoni’s blue brigade lifted the World Cup. The inception of a historical moment, in the nation’s 72-year old history.

What about Sri-Lanka, the silver-medalists of the night? How did they feel about being the losing side? The warm-smile on captain Kumar Sangakkara’s face conveyed a myriad of emotions; acceptance, admiration, sportsmanship- there’s so much to read into.

Well, avid-reader, looks like you might have finally stumbled upon your answer. On Friday, the former Sri-Lankan legend appeared on off-spinner Ravichandran Ashwin’s Instagram show ‘Reminisce with Ash’ and spilled the entire-story behind his iconic reaction.

“When you look at the Indian batting lineup, even 350 isn’t enough. I think, in my life, living in Sri Lanka, there are lots of things that bring you down. There are lots of things that you worry about. 30 years we have had wars, we have had natural disasters in 2005. We have so many different issues but one of the greatest things about Sri Lankans is resilience. It is just inborn in us. When we play, we want to win, we are extremely competitive,”  Sanga explained.

One can quite sympathize with the Lankan fans; after all, this was their third second-spot finish after the heartbreaks of the 2007 and 2009 (T20) World Cups. Not to mention, they had put up a performance quite worthy of the finale- lead by veteran Mahela Jayawardene, the emerald-islanders had notched up a strong, 275-run chase for the hosts. Even on the bowling front, they blazed off to a solid start with wickets of Sachin Tendulkar and Virender Sehwag in the first Powerplay.

Gautam Gambhir (97 off 122) and MS Dhoni’s (91* off 79) counter-attack allowed the hosts to find their way back in the game. In the end, Dhoni’s iconic six off fast-bowler Nuwan Kulasekara polished off the chase for the Men in Blue. And that’s a TL; DW version of the magical 2011-final run chase.

Sanga further commented that his smile veiled the disappointment of his fellow-teammates and countrymen. “Whether we win or lose, we have this equilibrium on how to take a win or loss. The smile hides a huge amount of sadness, of disappointment, of thinking of 20 million people back in Sri Lanka who had been waiting for this for so long, since 1996

“We had an opportunity in 2011, opportunity in 2007, then T20 opportunities in 2009 and 2012. So sometimes, the best way to take victory or defeat is to understand that that’s the way life is. Not every single thing goes your way. But the important thing is to be able to take that the same way,” he concluded.