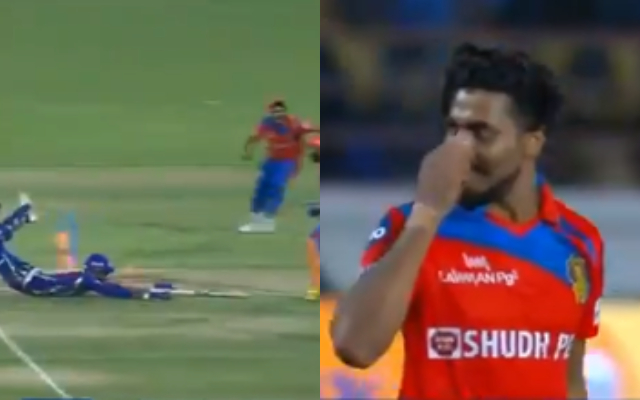 All-rounder Ravindra Jadeja has garnered a bit of a social media following in the ongoing lockdown period. Following up on his popular series of swordsmanship clips, aptly titled #rajputboy, the 31-year old recently offered a hilarious tweet on the country’s prevailing lockdown situation.

On Tuesday, ‘Sir’ Jadeja took to his Twitter to share video footage of 2017’s IPL game between the Mumbai Indians and the Gujarat Lions at the Saurashtra Cricket Association stadium. At first glance, the video seems to be a generic throwback post featuring one of Jaddu’s most high-octane on-field moments. Lions’ pacer Irfan Pathan was bowling the final over of MI’s innings, the latter needing 10 runs to win. Scoring a six and a single off the first two-balls, MI seemed to have gained just the right amount of momentum to seal the deal. That’s when Jadeja unveiled his inner warrior spirit; and changed the course of the match with a string of game-changing fielding efforts.

He started off by sending Jasprit Bumrah back to the pavilion courtesy a sensational direct hit. Bumrah dabbed the ball towards offside and took off for a run. Normally, he might have had succeeded, albeit by probably the narrowest of the margins; but Jadeja, a player internationally renowned for his fielding brilliance, stopped that premise from materializing.

And right when MI had thought that they had seen the last of Jadeja and his amazing field-acrobatics- they were dealt with the final, knock-out punch. Needing just a single run to win off the last ball, Lasith Malinga paddled off Pathan’s yorker towards point. Realistically speaking, the situation was always going to be a close call.  Had it been any other fielder, Krunal might have survived; the fielders throw missing, being a bit too late or early- there could’ve been a semblance of a chance. Not with Jadeja around, though. While the umpires did opt to double-check- the on-field replays only confirmed the prenomination; Krunal was short by a country mile. Jadeja, single-handedly through his fieldsmanship, had offered the Lions a second shot at redemption.

The quality of the footage would sure have made for an impressive ‘TBT’ post. Instead, Jadeja offered a whole new context to the situation by captioning the footage with a message themed around the lockdown motto of “Stay home, stay safe”. Here’s what he came up with: