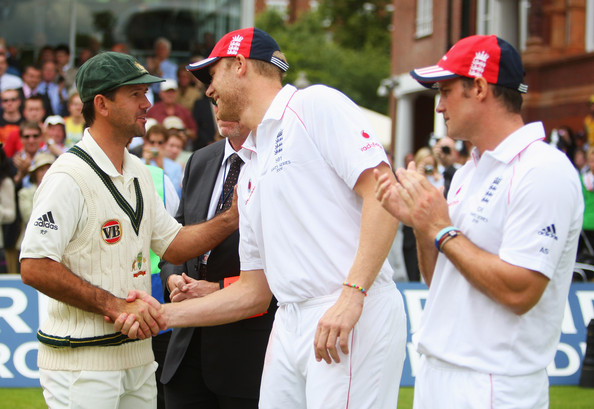 Legendary Australia batsman Ricky Ponting seems to be enjoying his time indoors engrossed in a trip down the good-old nostalgia lane. The two-time World Cup-winning captain recently took to his Twitter account to share; his words, not ours- “the best over” he ever faced.

Mind you; a label of ‘best’ from the legendary ‘Punter’ himself is no insignificant matter. Regarded as one of the best batsmen of his era; Ponting’s number of appearances for the national team tallies to a staggering 168 test matches and 375-ODIs. Having compiled over 13,000 international runs across each of those formats whilst averaging over 40- it’s not hard to understand the reasons behind his near impeccable reputation as a batsman.

As it so happened; the England and Wales Cricket Board (ECB) Twitter account did manage to stumble across one of the rare blemishes of Punter’s batting flamboyancy. On Friday, the ECB Twitter account uploaded a video of the faceoff between Ponting and all-rounder Andrew Flintoff in the iconic 2005 Edgebaston Ashes test match. The accompanying caption succinctly captured the emotion of the moment;  “Is there an emoji for goosebumps? That crowd noise @flintoff11″.

Ponting resonated with similar emotions in his retweet of the video through his caption, “Best over I ever faced. Class reverse swing at 90odd mph!”

Best over I ever faced. Class reverse swing at 90odd mph! https://t.co/EUdN9P64Cr

Flintoff and his strategy to dismiss Ponting

‘Freddie’ Flintoff’s all-round brilliance throughout the second test-match helped establish the 2005 Edgebaston test-match as a game to remember for the ages to come. Following up with clinical half-centuries in both the innings; Flintoff derailed Australia’s chase by sending opener Justin Langer back to the hut in the 13th over of the match. Langer’s wicket brought captain Ponting out in the middle. That’s when ‘Freddie’ decided to unveil his brutal-best.

In each of his first three deliveries, Ponting shuffles in his crease to make sufficient room for playing his shots. That’s where Flintoff deployed the fullish-length ball to his advantage, and in the process, managed to contain Ponting’s shot-scoring. Last ball of the over; he got carried away and tried to lob one a bit too-much outside off-stump, over-stepping his crease while doing so.

Ironically though, Flintoff finally hit the correct line in his repeat of the over’s final-ball; and managed to collect a thick-edge of Punter’s willow. Wicket-keeper Geraint Jones made quick work of the catch, earning Freddie a deserved and prized scalp of the Australian captain. The hosts engaged in an ecstatic cheering celebration as Ponting walked back to the dressing room without scoring.

Despite the hosts cashing on to their bowling advantages early in the innings, the game went right down to the wire. A couple of gritty innings from Michael Clarke and Damien Martin kept Australia well into the chase until the eighth-wicket. But right as England started to find their way back into the match, Brett Lee and Shane Warne put up a valiant 45-run partnership to frustrate the hosts. Just as Australia seemed to have found their way across the finishing line, fast-bowler Shane Harmison struck with the wicket of Michael Kasprowicz; winning England the match by a slim margin of 2-runs.