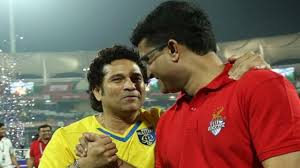 The Indian cricket team’s dressing room has been a proud abode to many of the country’s most talented athletes. The likes of MS Dhoni, Yuvraj Singh, Virat Kohli, Rohit Sharma- just to name a few; each of them embarked on their long road to international acclaim within the confines of that iconic, singular space. To think of all the achievement and success stories that originate from this room!

And yet- as with most things in life- there’s a darker side, too; aspects that often get brushed under the carpet for the greater well-being consensus. Chief sports-editor of the India Today group, Vikrant Gupta, recently opened about one of the lesser-known yet engaging dressing room clashes that has ever occurred in the dressing room. Ironically, this particular clash in question features two of the most celebrated Indian cricketers.

Vikrant takes us back to the Indian team’s 1997 tour to the West Indies. This was right around the time when opener Sachin Tendulkar had hit the form of his career. Courtesy of his fabulous Sharjah ‘Desert Storm’ and ’96 World Cup performances, the ‘Master Blaster’ had already established himself as a common household name. Come the end of the ’96 World Cup; the BCCI rewarded Tendulkar by promoting him as the team’s captain.

For as many of Sachin’s on-field accolades, though, his captaincy stint isn’t one that he can be too boastful about. In the 98-matches that Tendulkar led the national team in, he could register only 27 wins. Sure, the BCCI would later relieve him of the grueling captaincy duties. But that would happen later, after the infamous 1997 Barbados test-match- a game that Sachin himself labels as ‘one of the darkest days’ of his playing career.

A chase that should have been

Team India had to chase a 120-run target in the fourth innings. No cakewalk, sure- but not an impossible feat, either; especially for a batting line-up that boasted of the likes of Tendulkar, Rahul Dravid and Sourav Ganguly, among many others. Rumors say that Tendulkar had even tipped a restaurant owner to keep a bottle of champagne ready for the post-match celebrations.

Come the day of the chase- the fourth day of the match. In come Windies’ pacers Curtly Ambrose and Ian Bishop on a rough Kensington Oval surface. The duo steamrolled the visitors’ batting line-up, bundling them out for 81-runs. Windies had pulled off a massive upset-win.

Vikrant, over on his YouTube channel SportsTak, recollects the wrath of God after the humiliating defeat. “Sachin also gave a lesson to all the players in the dressing room. He doubted his own abilities after the two-Test series. And then there was that tussle with Dada. Sourav Ganguly, who was new to the team went up to console the skipper. When he walked up to Sachin, the then captain told him to get ready for the next day’s morning run. Ganguly did not turn up for it and that is when Sachin threatened him that he will send him back home and end his career.”