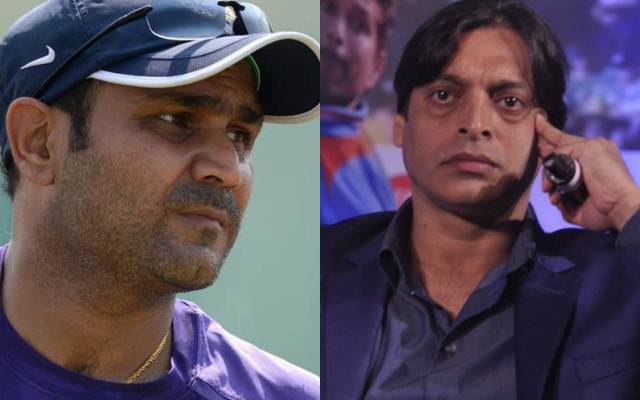 Back in his playing days, former Pakistani speedster Shoaib Akhtar was well-known for his fiery-disposition on field. The Rawalpindi Express’ heated word-wars feature in some of the most entertaining anecdotes in the gentlemen’s game; some of his exchanges with Indian cricketers, in particular, were, simply put- priceless, in the most amusing sense.

One of his more popular verbal-crossfires features former Indian openers Virender Sehwag and Sachin Tendulkar in the iconic 2003 India-Pakistan match at Centurion. The story goes that Shoaib came steaming-in with a barrage of bouncers at both the men in blue openers; who had to resort to playing hooks and uppercut shots to wall his short-pitched onslaught. Shoaib, allegedly, felt rather proud at the plight of his arch-rivals and verbally made it known to them.

Sehwag hits back at Shoaib’s bouncer-barrage

And in perfect, cinematic fashion, when Shoaib bowled his next bouncer to Sachin- the Master Blaster clobbered him for a six! More than one six, actually- Shoaib ended his spell at 10-0-72-1, with Tendulkar (98 off 75) extinguishing most of his fire. Although he did manage to savor the last laugh as he sent Sachin back to the hut with- surprise- a bouncer. But the damage was already done- Rahul Dravid and Yuvraj Singh made a short work of the remaining chase to push India to a 4-0 record against their cross-border rivals.

For as interesting as that story sounds, no one has been able to authenticate on these claims. That was, until recently, when Shoaib blatantly rubbished any incident of the sort. Renowned Pakistani journalist Saj Sadiq recently asked Shoaib to drop his two cents on the story. Here’s what the Rawalpindi express had to say:

Question: Sehwag said something to you about Tendulkar, (referring to the Beta beta hota hai, baap baap hota hai story)

Shoaib Akhtar "Would he survive after saying something like that to me? Would I leave him? I would beat him up at the ground and then at the hotel"#Cricket