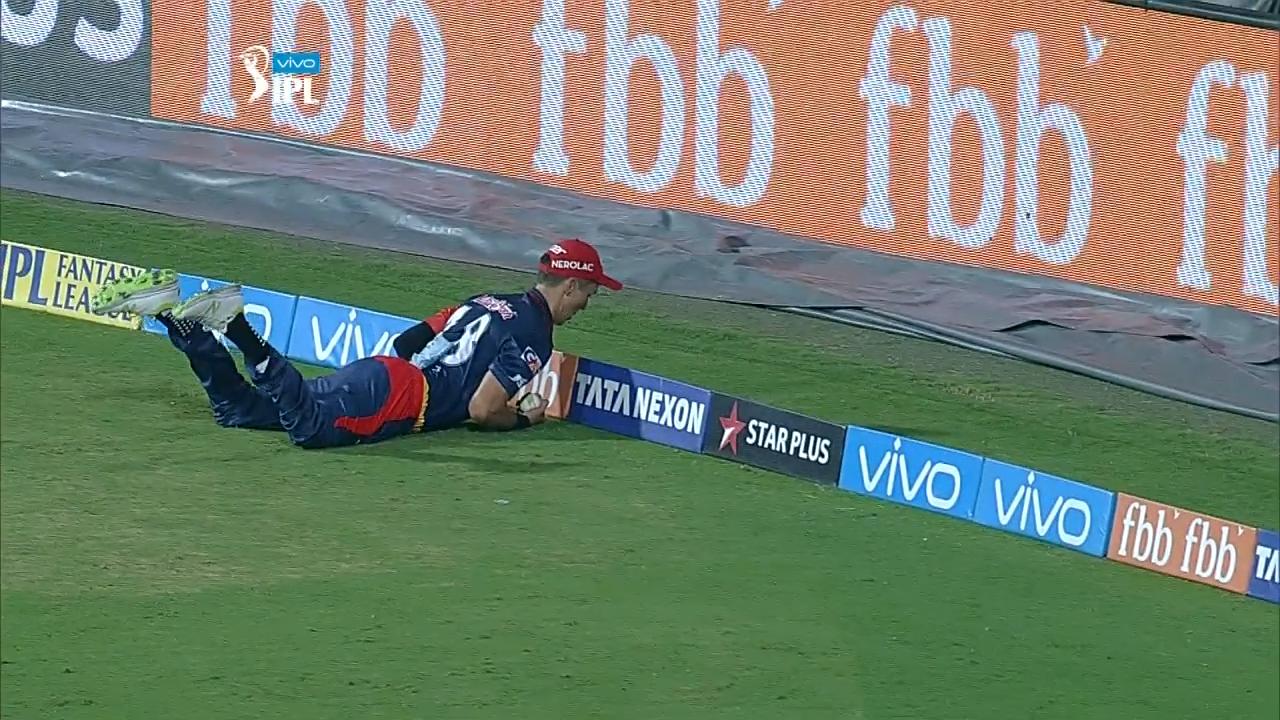 Top-quality cricket has always been a highlight of the extravagant Indian Premier League. From one aspect to another; talk about game-changing innings, top-notch bowling spells, or scintillating fielding efforts; the entertainment here, never ceases to exist. Today’s focus will specifically be on that last bit, as we relieve ‘the best catch we’ve ever seen in the IPL’, as commentator Isa Guha had claimed.

The 19th match of the IPL 2018; it’s Delhi Capitals up against the Royal Challengers Bangalore at the M Chinnaswamy Stadium. Both teams eager to add 2-points to their mathematically similar tallies, each reading 2-points from 4-matches. Hosts RCB started off with the toss advantage, opting to bowl first. Capitals, courtesy of some stabilizing innings from Shreyas Iyer (52 off 31) and Rishabh Pant (85 off 48), notch up 174/ 5 in their allotted 20-overs. With figures of 3-0-22-2, Yuzvendra Chahal finished as the home side’s best bowler.

Onto the second innings now. RCB begin the chase on a somewhat shaky note, losing openers Quinton de Kock and Manan Vohra within the powerplay. At 29-2, Virat Kohli and AB de Villiers- one of the most iconic duo in the tournament’s history- decided to combine forces. The duo stitch a match-defining 63-run third-wicket partnership, until Kohli’s departure in the eleventh over. And with that very dismissal, Trent Boult delivered the highlight moment of the match.

Catch of the match

Harshal Patel’s full toss angled away towards Kohli’s leg-side; who tried to use the direction to his advantage, and played a flick over square-leg. Even with a fielder stationed there, the loose-delivery seemed almost destined to find its way over the boundary-rope. That’s when the said-fielder, aka, Boult, acted impulsively on his cricketing-aptitude, to deploy his physical attributes to great use; the 1.8m tall bowler jumped just in time to get a hold on the airborne ball. How he managed to hold on to that fast-charging projectile beats anyone’s imagination; or even more intriguingly, how he managed to time his fall just margins away from the boundary rope. Nope, we’re as clueless as Virat Kohli had been.

Boult’s on-field brilliance couldn’t really translate on to his overall bowling performance, though. In fact, none of the Delhi bowlers could really contain the flamboyant pyrotechnics of AB de Villiers, who blazed away with an unbeaten innings of 90 off 39 balls; including 10-fours and 5-sixes. RCB comfortably chased down the score with 2-overs to spare.