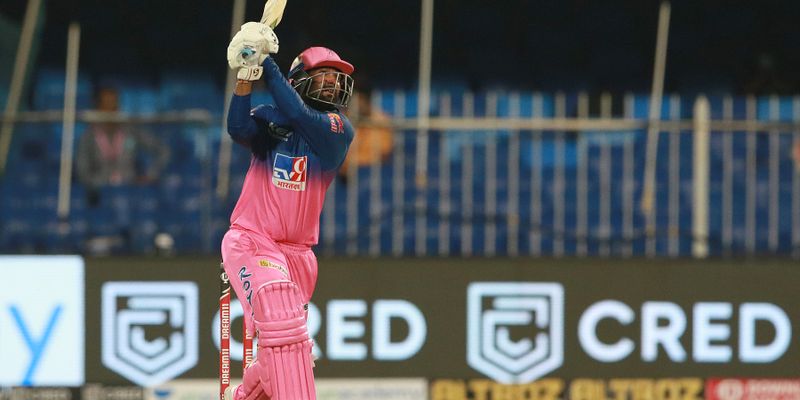 The 13th edition of the Indian Premier League has been the season of youngsters so far. The young brigade is ruling the roost this IPL. The matches have been thrilling and the fans couldn’t ask for more. Rahul Tewatia became a sensation after he hit Sheldon Cottrell for 5 sixes in an over and took Rajasthan Royals to a victory.

He couldn’t replicate the same in the match against KKR, however, he has seen in his element once again on Saturday against Royal Challengers Bangalore. With his batting against RCB, Tewatia made a statement that his inning against KXIP was not a fluke. He proved that he has the power-hitting ability even on bigger grounds than Sharjah.

In the last over of Rajasthan Royals’ inning, Navdeep Saini bowled a beamer, which Tewatia tried to scoop down the leg side but was rather hit on the chest. The batsman went down in pain after being hit by the nasty delivery. Tewatia was undeterred by the blow and what came in after was the perfect revenge taken by the batsman.

The delivery was called a no-ball by the umpire, followed by a free hit. In reply, Tewatia sent the free hit out of the park. The next ball met the same fate as Tewatia shuffled across to play a full toss around off. The fans on Twitter went into a frenzy and called it the ‘perfect revenge’ taken by Tewatia.

Here is the Video (Tewatia hurt, then hits)

A quick-fire knock of 24 in just 12 deliveries by Rahul Tewatia helped RR to achieve a decent total. However, his team ended up losing the match against Royal Challengers Bangalore. Royals set a target of 155 for the RCB which they chased down quite easily, courtesy half-centuries by Padikkal and Kohli.

With 2 more points in their kitty, RCB has moved up to the second position on the points table, while Rajasthan Royals have slipped down to the sixth position. RCB will next face Delhi Capitals on 05th October and Rajasthan Royals will go against Mumbai Indians on 06th October.