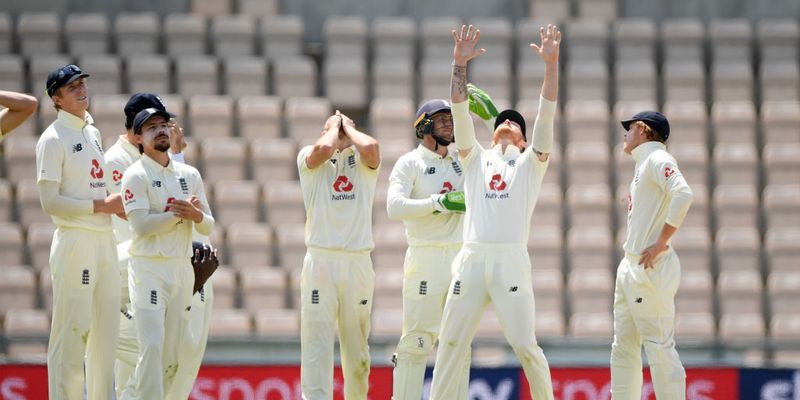 In the last few years, the role of fielding in a cricket match has grown by leaps and bounds. One needs to be totally fit in order to give their best on the field. Fielding at the slip cordon is even more difficult. It demands utmost attention and smartness to make the most of every chance. Ben Stokes however, in over eagerness, made a mess of an easy catch.

West Indies were reduced to three wickets and England were in a commanding position at one point of time. It was a great chance for Stokes himself to start his captaincy on a winning note but it wasn’t to be. In the 19th over of the innings, Dom Bess almost got rid of Jermaine Blackwood but Stokes in his over-anticipation dropped a simple catch.

Ben Stokes’ over-smartness got the better of him

Ben Stokes running out of the way of a catch and falling over – that's a real commitment by the new captain to the comedy cricket ideals that @LiebCricket expects of England. pic.twitter.com/SpkAZInDBV

Ben Stokes just made a fool of himself in the slips. How do you premeditate a catch? I hope he rues that!#ENGvWI

Bess bowled a short delivery to Blackwood who went for a cut shot however, he failed to pull it off. As a result, the ball took an outside edge to fly towards the slip cordon. Ben Stokes, being a world-class fielder, he is, should have caught the ball easily, but his over smartness got the better of him.

He anticipated the ball would come to his right and he tilted in that direction, but the edge actually flew to his left. Had he stayed firm in his actual position, the ball would have come straight to him, making it an easy chance.

The dropped catch hurt the English team badly as Jermaine Blackwood went on to score 95 runs becoming the top-scorer of the match. Eventually the inning by Blackwood played a crucial role in Windies win. This is West Indies’ first win since the sport’s return after the coronavirus outbreak.

Earlier in the first innings, team England was all out on a petty score of 204, to which West Indies replied with a solid score of 318 getting a healthy lead of 114 runs. England tried to fight back in the second innings but a brilliant spell by Shannon Gabriel stopped them at 313. West Indies got a small target of 200, which they achieved with 4 wickets in hand.