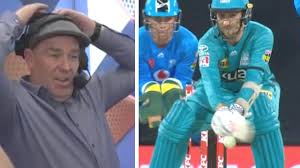 The ongoing edition of the Big Bash League (BBL) has seen some horrendous umpiring errors. And just when you thought that the quality of refereeing couldn’t stoop lower than awarding incorrect LBW decisions; the BBL comes up with some novel and horrendous ways to prove you wrong. Case in point: Tom Cooper’s mind-boggling dismissal in Wednesday’s match between Adelaide Strikers and Brisbane Heat.

Chasing 151, Heat had found themselves in a somewhat precarious position, having lost half their team inside the first 10-overs. But just when stand-in captain Jimmy Peirson and Cooper were getting things back on track; an umpiring howler completely changed the course of the game.

Tom Cooper unfairly gets adjudged out on an umpiring howler

Left-arm-spinner Danny Briggs was bowling the 12th over for Adelaide. The second ball of the over, he pitched up a flighted off-spinner to Cooper, who was on strike. Seeing the ball angling sharply towards the stumps, Cooper attempted a reverse-sweep but failed to get any connection. It was clear that the ball had struck Cooper at some part of his body, so the Strikers’ went up in a loud, collective appeal. Straight umpire Tony Wilds took some time in making up his mind before ultimately ruling out.

However, subsequent on-field replays showed that before hitting the pads, the ball had made clear, visible contact with Cooper’s bat. But since the BBL hasn’t implemented the Decision Review System (DRS), Brisbane couldn’t challenge the decision. Consequently, Tom Cooper had no choice but to walk off the field.

Oh my… HOW was this given out?!?! 😱#BringtheHEAT #BBL10 pic.twitter.com/QpvSKYc8vq

Shane Warne, who was commentating at the time of the incident, was left vociferously frustrated at the poor umpiring. Even before the replays, he kept on insisting that Cooper had got a sharp under edge on the ball. But once the writing on the wall became clear, there was no stopping Warnie’s wrath.

"OH MY GOODNESS! What is going on with this umpiring?"

Shane Warne has fumed after a second brutal #BBL10 howler in the space of 24 hours.

“OH MY GOODNESS! What is going on with this umpiring? Something has to be done, this is ridiculous,” he vented on Fox Cricket’s live feed. “Just come on. Enough’s enough. Enough is enough. We’ve seen too much of this.”

Cooper’s wicket came at a crucial juncture of the Heat innings. And it proved quite costly too; as Heat eventually went on to lose by a narrow 2-run margin. But that’s just the underbelly of the bigger issue. The absence of DRS has seen a whole bunch of umpiring howlers in the current season. From Andre Fletcher’s incorrect LBW to Usman Khawaja’s grounded-bat ambiguity; there have been errors aplenty. Several prominent Australian names in the cricket circuit have voiced their frustration on the matter.

Wow. There have been some true howlers in the #BBL10 and that was one of them…

Has the case for the DRS in the Big Bash ever been stronger? #BBL10

I mean, never mind the nick, how on earth was that hitting a stump?!?!#BBL10

Despite his outburst, Warne empathized with Tony while simultaneously advocating for the DRS. “We feel for these guys, it’s nothing personal against each of the umpires. We know the umpiring position is such a tough job. But we just can’t have these decisions and mistakes. It’s human, we’re gonna make mistakes, but we need to have DRS,” he concluded.