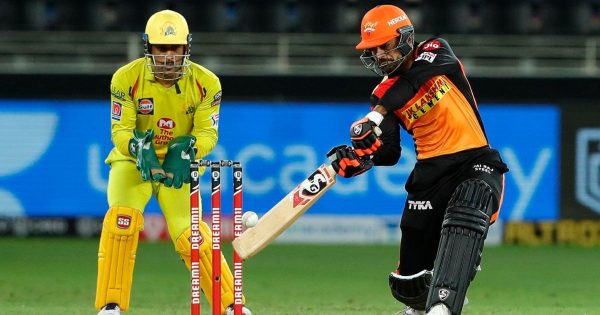 In yesterday’s game, Rashid Khan got out in one of the most unusual ways in the history of IPL. The bowling all-rounder from Afghanistan got hit wicket and caught at the same time off Thakur’s delivery. The event unfolded in the 19th over when SRH needed 22 runs off seven balls. More so, the SRH bowling all-rounder tried to loft Shardul over long-on. However, the ball landed in the hands of Deepak Chahar. But, before that, Rashid had already hit the stumps with his leg mistakenly.

Well, the dismissal got into the scorecard as hit-wicket. The reason being Rashid had hit the stumps before the ball landed in the hands of Deepak Chahar. The catch pretty much sealed the deal for CSK as Rashid happened to be SRH’s last hope in the run chase. Eventually, Bravo’s exceptional final over earned CSK the crucial two points. Bravo just gave away one run in the final over.

Talking about the match, MS Dhoni called it right at the toss time and decided to bat first. CSK needed to get a good start with the bat, as it has been one of the problems for CSK. Dhoni surprised everyone as Curran came out to open the innings with Faf du Plessis. Sam Curran delivered to CSK’s request as he scored a quick-fire 31 off 21 balls. Curran’s knock gave a good base for CSK to build a decent total.

After Curran’s foundation knock, Watson-Rayudu cameo, and Dhoni & Jadeja’s quick runs at the end, CSK managed to put up a decent total on the board. For SRH, T Natarajan, Khaleel Ahmed, and Sandeep Sharma picked three wickets each.

Jonny Bairstow and David Warner opened the innings for SRH. The opening stand didn’t turn out to be good for SRH as CSK reduced them to 27 for two wickets. Nonetheless, Kane Williamson provided much-needed support, which kept SRH in the game. Post Williamson, Rashid tried to get the things right for SRH. However, a clinical bowling performance from CSK won them the game.

Ravindra Jadeja was awarded the Man of the Match for his quick-fire 25 off ten balls and wonderful effort in the field. Besides, Jadeja also picked up a wicket.