The seasoned campaigner from England is seen shredding the picture of Ravi Ashwin in a shredder. 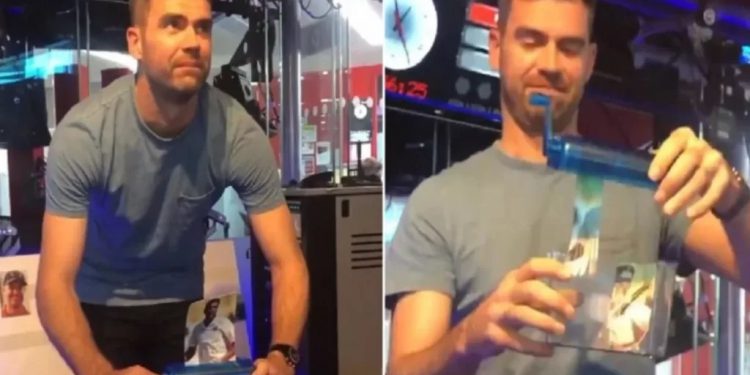 England may have escaped the defeat in the first Test in the ongoing Test series against India on account of rain, but the Indian squad didn’t miss the opportunity to win the second Test in Lord’s. The second Test between India and England saw a lot of heated exchanges and verbal spats between players. Now, an old video of James Anderson is going viral where England’s seasoned campaigner is seeing shredding the picture of Ravichandran Ashwin.

The Lord’s Test will surely go down as one of the most memorable wins in the history of Indian cricket. At one point, team India was looking to save the test and even that looked like an uphill task. From there, the team didn’t only give an unattainable lead to England, but also wrapped up the English team in just two sessions. The bowlers gave a terrific performance which led to the remarkable win.

There were a lot of moments in the match where the players from both teams got involved in heated arguments. Indian skipper Virat Kohli was involved in a tussle with James Anderson on the 4th day of the match, but the real tempers flared on the fifth day when the English players bombarded Jasprit Bumrah with the verbal volleys. Bumrah was batting fearlessly on day 5 and the English players tried to get into the skin of the Indian bowler.

Now, an old video of England pacer James Anderson is doing rounds on the internet where the fast bowler is shredding the picture of Ravi Ashwin in a shredder. This video is from the 2019 edition of the Indian Premier League.

They do this. Then their supporters talk about Spirit of Cricket. Don't know how low can they go!

When I said Englishmen deserve getting those sledging from the Indians (Kohli & Bumrah specifically), I meant it and rightly so. 👍 pic.twitter.com/tJTUEao144

This was done by Anderson after Ashwin had mankaded Jos Buttler, A Twitter user posted the video and expressed her displeasure on the same. She even backed the Indian players for retaliating against the sledging in the second Test.

As for the series, the third Test match is going to take place in Leeds and will start from 25th August.