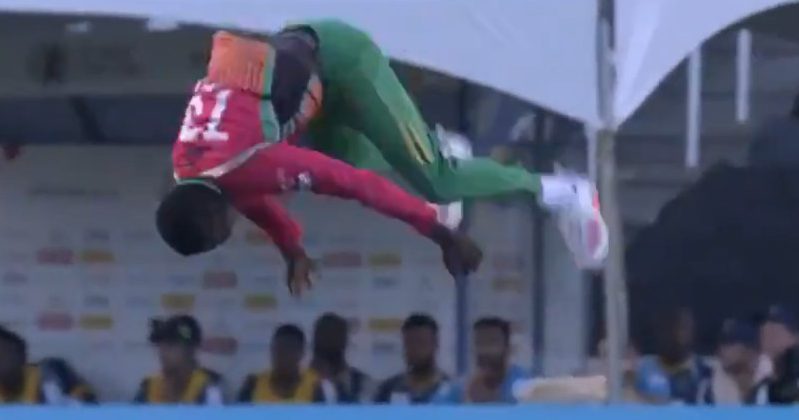 After taking a wicket, Kevin Sinclair performed an exciting somersault. Well, the Guyanese cricketer looked no less than a gymnast. The celebration of Kevin Sinclair amazed everyone around and the fans as well. Talking of Sinclair’s performance in the game, the Guyanese grabbed two wickets in his quota of four overs.

Naveen-Ul-Haq of Guyana Amazon Warriors was adjudged as the Man of the Match for his exceptional display with the ball. The Afghani paceman scalped four wickets in his quota of four over while giving away just 14 runs. Barbados Tridents called it right at the toss and decided to bat first. But, on account of an exceptional display with the ball from Amazon Warriors, Tridents could only score 92 runs in their quota of 20 overs.

Guyana Amazon Warriors chased the short target in 16.4 overs while losing only two wickets. For Barbados Tridents, Mitchell Santner was the highest scorer (36). And, for Guyana Amazon Warriors, Brandon King smashed an unbeaten 49-ball 51 to take his side home. Well, there was not much in the match for the fans. Hence, Kevin Sinclair’s acrobatic celebration made the day for the fans.