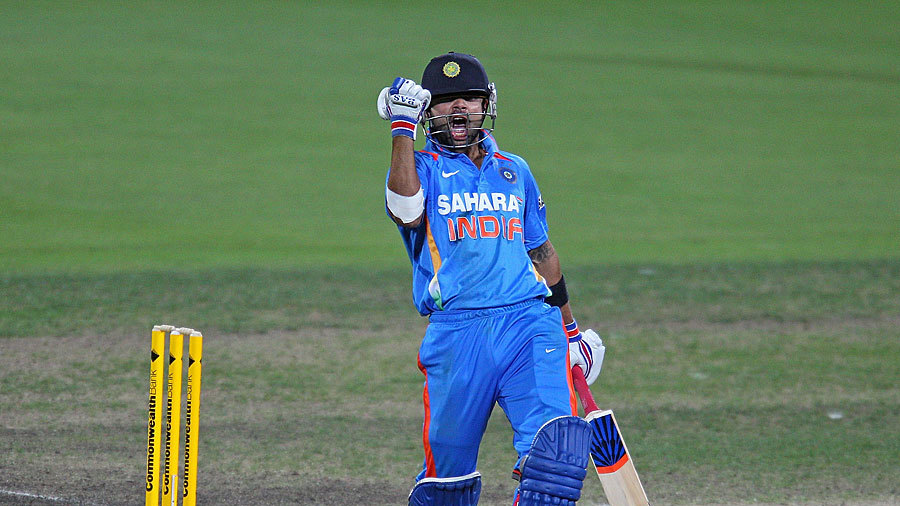 Virat Kohli 133 runs knock against Sri Lanka in Commonwealth Bank Series 2012 is one of the best knock of current Indian skipper’s career. The innings is a proof of 31-year old’s ability of chasing big totals and mindset of playing under pressure situations. It was a do or die situation for India in their final match of the group stage.

India had to win the match with a bonus point to keep the hope of the final alive. India won the toss and elected to bowl first. Indian bowlers had to restrict the Sri Lankan side on a easy to chase total. But the bowlers failed to do this work. Tilkaratne Dilshan and Kumar Sangakkara’s 200-run partnership frustrated the Indian side. Dilshan’s 160 and Sangakkar’s 105 helped to put 320 runs on the board.

Now India had to score 321 runs under 40 overs to win the match with a bonus point. Sachin and Sehwag gave a quick start to India’s innings. However, both were not able to stretch their innings. When Virat Kohli came to bat, India had lost sachin and Sehwag at the score of 86 runs. Now, India needed to score 235 runs in 184 balls with two new batsmen Gautam gambhi and Virat Kohli on the crease.

Both the batsmen were in form and started building the partnership and also kept the run-rate balanced. However, Gambhir’s innings was a bit slow when looking at the situations. The southpaw scored 63 off 64 balls including 4 boundaries. Even after Gambhir’s dismissal, Virat Kohli’s batting style did not let the team fall in pressure. He was 23-year old at that time and handling such pressure single-handedly is a thing we rarely see in less experienced batsman.

On this day eight years ago, Virat Kohli produced a truly absurd ODI knock in Hobart. One of the great highlights packages. pic.twitter.com/3n6IquzIhW

At the end, Virat Kohli chased down the total alongside Suresh Raina in 36.4 overs. Virat Kohli scored unbeaten 133 off 86 balls. After India won the match with a bonus point, now India were dependent on the Australian team that they win their match against Sri Lanka. in this case India would qualify for the finals but it didn’t happened.

Australia had to chase 238 runs to make India’s way to the finals. It was a easy looking target for them but Sri Lanka won the close contest with a margin of 9 runs. India were knocked out of the tri-series but Virat Kohli 133 runs innings is still regarded as one of the best knocks of ODI cricket.