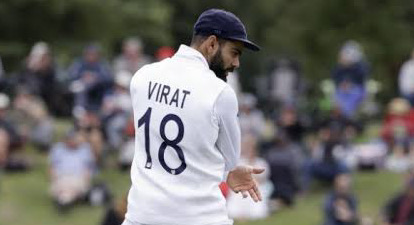 The first Test match between India and England ended on a disheartening note for the Indian fans. The Asian giants were outclassed by the English team owing to their dominance since Day 1 of the match. On Day 4 of the just concluded Test, Indian skipper Virat Kohli was seen complaining against the English pacer Jofra Archer to umpire Nitin Menon.

Team England came well prepared for their assignment in India and it was evident by their performance in the first Test. Joe Root who is at the helm of the English team led by example with a scintillating double hundred in the first inning and a quickfire 40 in the second inning. All the English bowlers did an exceptional job and the Indian batsmen seemed to have no answer.

The only silver lining for the Indian team was their bowlers’ performance in the second inning. The Indian attack bundled the England team for a paltry 178 but their first inning lead was enough for them to get a lead over 200. On Day 4, when it was extremely crucial for the Indian team to save every run, Kohli complained against Archer who was running on the pitch.

The tail was adding some quick and important runs for the England team and it was when Kohli mentioned to the umpire about Archer running right between the pitch. As per the rules, no player is permitted to walk or run on the protected area in order to preserve the pitch. Even after a clinical performance by the bowlers, team India had a mountainous task of getting 419 on the fifth day pitch with uneven bounce.

Team India kept losing wickets at regular intervals and couldn’t build any partnership which was the need of the hour. Virat Kohli tried to hold one end but eventually perished to a Ben Stokes delivery which kept low. All the English bowlers chipped in with Jack Leach being the pick of the bowlers scalping four wickets in the second inning. Joe Root was awarded with the Player of the Match award.