The Indian skipper gave a befitting reply to the reporter in an online interaction after winning the second Test. 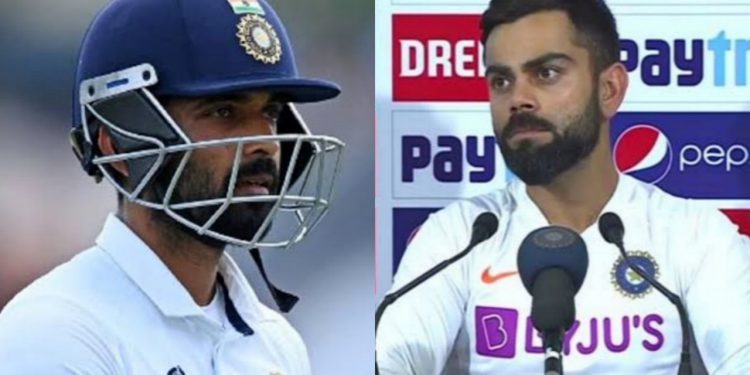 Ajinkya Rahane has been struggling with his form for a long time now and that has raised a lot of questions over his selection in the Playing XI even after his poor run. The right-handed batsman was rested in the second Test against New Zealand owing to a minor hamstring injury. The Indian skipper was recently asked to judge Rahane’s form and Virat Kohli delivers a ‘Mic Drop’ reply to the question.

The Indian team put on a dominant show in the second Test as they thrashed New Zealand by a mammoth margin of 372 runs. Three of the main players from the team were rested due to minor injuries and one of them was Rahane along with Ishant Sharma and Ravindra Jadeja. Rahane has been in the limelight because of his poor run and the Indian skipper was asked a question regarding Rahane’s form and Virat Kohli had the befitting reply.

The Indian skipper was asked to judge Ajinkya Rahane’s form who has been serving as the deputy to Kohli in Test matches. Virat Kohli made it clear that he is no one to judge the vice-captain’s form. Kohli was strict in his reply as he made it clear that they don’t base their opinions on what’s going on outside.

“I cannot judge Ajinkya’s form. I think no one can judge it. The individual knows the areas of the game he needs to work hard. We need to back players who have come up with impact performances for us in the past under tough situations in key Test matches. If there is some pressure on an individual, people start creating an environment wherein everyone is asking what will happen next? We don’t entertain that as a team,” Kohli was quoted saying in an online interaction after the victory.

Virat Kohli has backed Ajinkya Rahane as an integral part of the team. Interestingly, Rahane has been exceptional as far as his captaincy is concerned, however, his form with the bat has been the talk of the town. He has been given plenty of chances and that has irked a section of the fans since a lot of youngsters are waiting in line to play for India in the longer format.