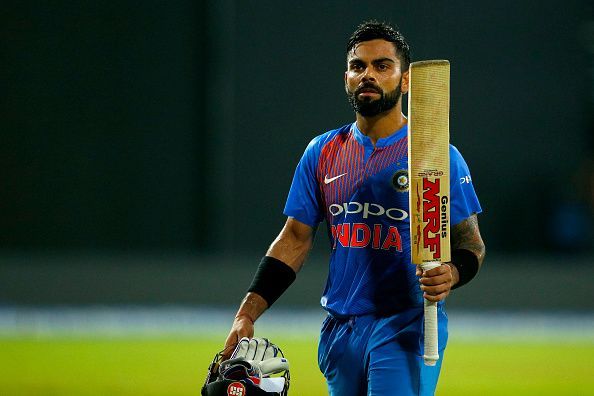 Upcoming T20 series against New Zealand will be India’s first-ever 5-match series of this format. A 16-man squad has been announced for the series however BCCI made an update in the squad as they replaced injured Shikhar Dhawan with Sanju Samson. Indian skipper Virat Kohli has an opportunity to set 5 T20 records in this series.

Most T20I Runs As Captain: South Africa captain Faf du Plessis is currently holding this record. He has scored 1273 runs in 40 T20Is as captain. Virat Kohli who is on a record-breaking run since he has appointed as captain is not too far away from Plessis. 31-year old has captain India in 33 matches in which he has scored 1032 runs. So, Virat is 243 runs behind Plessis and 5 matches are enough for him to reach there.

Maiden T20I Hundred: Virat has records which only some of the players have achieved or only he has achieved. Still, the talented batsman is not having some records which define a batsman’s career. One of these records is a century in T20 international cricket. After 78 T20I matches, Virat Kohli does not have a T20I century. But there are 5 matches to play in the upcoming series and fans feel it’s coming.

Most T20I Runs In Away Venues: Virat Kohli is just two runs away to achieve this record. Currently, Virat sits at No. 2 with 954 runs in 29 T20Is at an average of 50.21. After scoring two runs in the upcoming series he will surpass veteran Pakistan all-rounder Mohammad Hafeez who has 955 runs out of Pakistan.

Most runs by an Indian batsman in New Zealand: This will be Virat Kohli’s first T20I series in India. MS Dhoni and Rohit Sharma are the Indians with most T20I runs in New Zealand with 91 and 96 runs respectively. Scoring 91 in 5 matches is a cakewalk for Virat Kohli however surpassing Rohit is a challenge as he is also playing this series. It will require a top effort from Virt to surpass Rohit Sharma