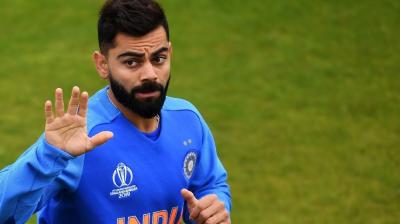 Virat Kohli has been at the receiving end of the fans’ fury in the recent past. His decision of leaving the Test series in Australia for the birth of his first child didn’t impress a lot of fans. Surprisingly, everyone online started reminding Kohli of Dhoni’s decision of skipping his daughter Ziva’s birthday for his country. Now, Virat Kohli’s Diwali message has created quite a stir and the star India batsman is facing the heat.

A lot of cricketers took to their social media handles to wish their fans on the felicitous day of Diwali and Virat Kohli was one of them. The right-handed batsman wished his fans and also tried to convey an eco-friendly message. Kohli posted a video on Instagram reels wishing all the fans and asking them to refrain from bursting crackers.

“A very happy Diwali from me to you and your families. May god bless you with peace, prosperity and happiness this Diwali. Please remember do not burst crackers to protect the environment and have fun at home with your loved ones with a simple diya and sweets on this auspicious occasion,” Kohli said in the Instagram video.

However, the video backfired and a lot of fans were left displeased by Kohli’s plea of not bursting crackers. And to add salt to the injury, one of Kohli’s 2016 tweet has gone viral where the batsman could be seen smiling and taking pleasure in firecrackers on New Year. Kohli even celebrated his birthday with firecrackers few days back.

The fans called out Kohli for his hypocrisy and started bashing him left, right and centre. It was definitely not the kind of response Kohli would have been expecting. The RCB captain has also been under scrutiny after the poor run of his team in yet another season of IPL. Former cricketer Gautam Gambhir even went on to say that Virat Kohli should be removed from the post of the captain.

U must be out of your mind..
After all the "celebrate diwali without cracker" nonsense, THIS picture??
Bewakoof ho.. https://t.co/rg6Mk3iKFP

Back then crackers were environment friendly. https://t.co/Qcv1uELXP5

What happens to your non firecracker waala dhakosla. https://t.co/Uqpmnvlhcd

The fans even speculated a rift between Rohit Sharma and Kohli after the exclusion of the former from the Australian tour. However, Sharma was later included to the Test squad.