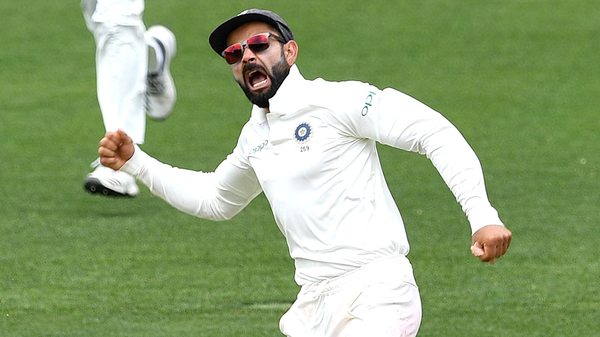 The ongoing tour of New Zealand is not less than a nightmare for Virat Kohli. The Indian skipper has repeatedly failed to perform with the bat at the soil of Kiwis. Virat Kohli didn’t reach a single 3 figures mark during the whole tour which makes this his worst international outlining across formats.

On Sunday, an under-pressure Indian team entered the field in 2nd test. India is 1-0 down in the series and the first day of the 2nd test didn’t go in India’s favour. First, they were all-out at the score of 248 and later in the day were unable to break the opening partnership.

However, a lot went in India’s favour today. Umesh Yadav gave a crucial breakthrough to India sending opener Tom Blundell back. Later, Kane Williamson was dismissed by Bumrah cheaply at the score of 3 runs. After the wicket of Williamson, we got to see an aggressive side of Virat Kohli. It all happened in the 30th over, when the Kiwi skipper edged a ball to wicket-keeper Rishabh Pant.

The fans on social media didn’t like such send-off from one legend to another legend. Williamson is one of the least hated cricketers of all time. Also, Virat Kohli has shown immense respect to Kane Williamson in the past. It’s worth to mention that Virat Kohli had won ICC Spirit Of Cricket Award for his gesture to the crowd booing Steve Smith during ICC World Cup 2019 match. So today’s behaviour was unacceptable for the fans.

Talking about the match, India bundled out the home side at the score of 235 runs and had a lead of 7 runs before the 2nd innings. However, in the second innings, we once again saw the weak side of Indian batting. At the end of 2nd day, Virat Kohli-led side playing at 90 runs at the loss of 2 wickets. A strong performance was expected from the likes of Kohli, Pujara and Rahane.