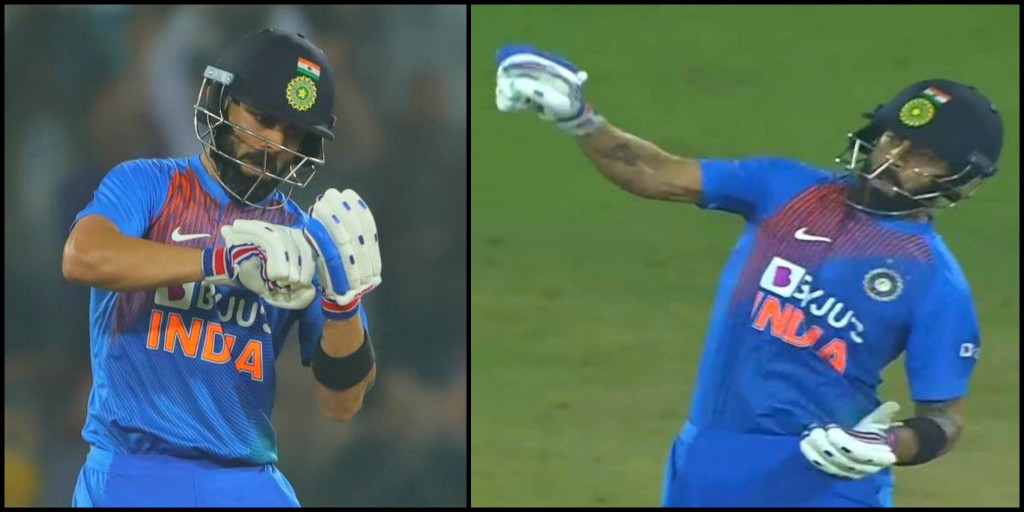 India vs West Indies first T20I match was full-on entertainment. While batting first West indies set a mammoth 208 runs target for India. Their top and middle order contributed to the total with small but quick knocks. Shimron Hetmyer scored 56 off 41 balls. Evin Lewis’s quick knock off 40 off 17 balls had given astart to the Windies innings.

India had chased a total of 200-plus only two times in T20I. After losing Rohit Sharma’s wicket, Virat Kohli and KL Rahul made a 100-run partnership. Lokesh Rahul departed after scoring a well made 62 off 40 balls. But the chase master Virat Kohli didn’t let West Indies bowler put pressure on the Indian side.

This is not the first moment that a batsman has mocked Williams with the celebration. Before this, the celebration was made public when Chadwick Walton had copied Williams in the Caribbean Premier League. It was Chadwick’s revenge as Williams had given ‘notebook’ send-off to him previously.

Yesterday, Virat Kohli made Kesrick Williams’ life difficult. The bowler conceded 60 runs in 3.4 overs spell. 31-year old took India to a 6-wicket win with 8 balls to spare. This is the biggest total ever chased by Team India. Virat scored unbeaten 94 off 50 balls which is now his highest score in T20 internationals.

Interestingly, in first 20 balls of the innings, Virat had scored only 20 runs and in next 30 balls, Virat aggregated 74 balls which shows why he is known as chase master. Virat received his 12th man of the match award in T20I cricket which is joint-most with Afghanistan’s Mohammad Nabi.