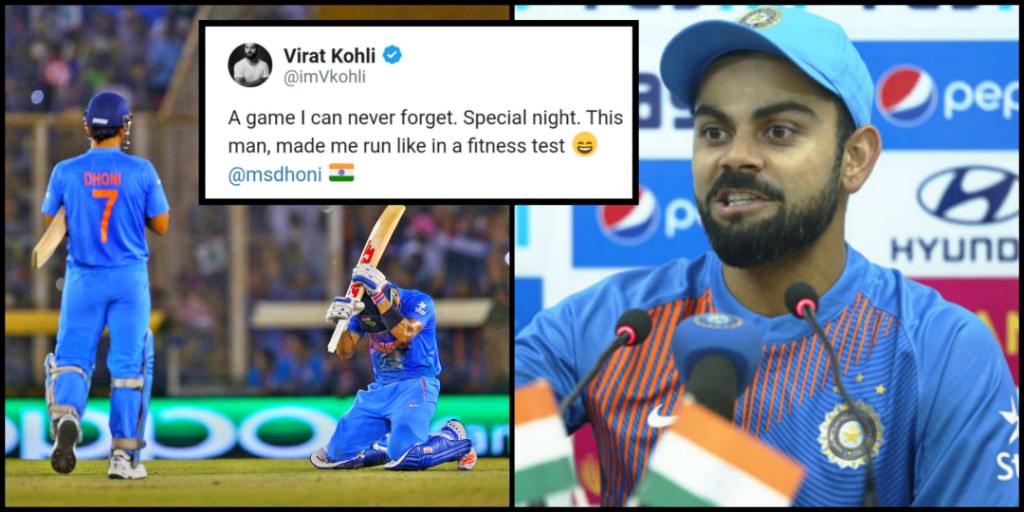 Recently, Virat Kohli uploaded a throwback picture from 2016 T20 World Cup. The picture is showing Virat Kohli on his knee after Dhoni finished India vs Australia match with a four. Kohli called it a special game and mentioned Dhoni in the post writing, “This man, made me run like in a fitness test,”

A game I can never forget. Special night. This man, made me run like in a fitness test 😄 @msdhoni 🇮🇳 pic.twitter.com/pzkr5zn4pG

As Indian skipper posted this all of a sudden, the retirement speculations of MS Dhoni started sparking on the social media. The fans thought this is an indication of Dhoni’s retirement. Also, rumours started spreading that Dhoni has called for a press conference where he will take the decision of hanging his boots. But BCCI and Dhoni’s wife Sakshi demolished all the rumours.

Chief selector MSK Prasad said when asked if there is any update about Dhoni’s retirement, “No, absolutely not. It is surprising to hear that.” Sakshi Dhoni too made the things clear with her three words message on twitter. The tweet read: “It’s called rumours”.

Now, Virat Kohli also has opened up on his post which broke the internet. During the pre-match press conference at Dharamshala Kohli revealed why he posted this pic outta nowhere. Kohli said, ” “Mere zehen mein kuch naahi thaa yaar (I had nothing in my mind),” said Kohli. “I was sitting at home and I normally put out a photograph and it became a news item.”

Virat further added, “I think it was a lesson for me, that the way I think, the whole world does not think that way. There was nothing in the farthest stretch of my imagination (that it could be taken as retirement tribute) while putting that picture out on social media.”

ALSO READ: Ambati Rayudu Named as the Captain of this Team after retirement U-Turn

India vs South Africa T20 series starting tomorrow at Dharamshala. After the T20 series, the 3-match Test series will start on 2nd October. This will be India’s second series as the part of ICC World Test Championship. India won both matches in the first series against West Indies. Currently, with 120 points India is at the top on ICC World Test Championship points table.