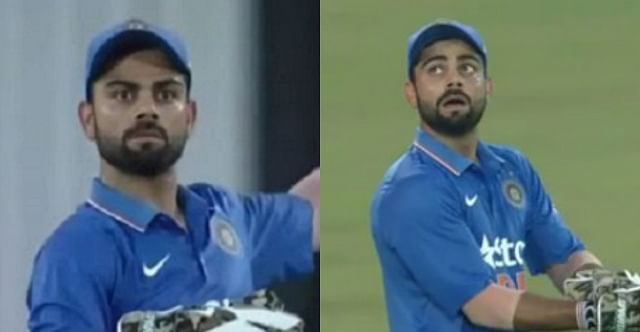 Virat Kohli and class batting go hand in hand. He has been one of the finest batsmen in the world cricket. The way he handles pressure situations is matchless. In fact, his best comes out when the chips are down and he has the responsibility to either build the innings or win the match chasing. Kohli shares a great rapport with Dhoni which always resulted in victories for team India.

Undoubtedly, Kohli is amongst the very few batsmen who can cope up with any situation on the field. In addition to that, he is a great fielder too which aids the team in a great manner. Ever since he became the captain, his game has only improved and he has shown how good a captain he can be.

Captaining the No. 1 side is no easy task and it requires a lot of hard work and patience. Sometimes you have to do things you never imagined. It would be surprising for many people to know that once Kohli kept wickets in an ODI game against Bangladesh in 2015.

It was the 44th over of Bangladesh’s innings when Dhoni had to answer the nature’s call and he asked Kohli to keep wickets. He returned on the field in the 45th over and resumed his duties and Kohli went back to his fielding position.

Kohli spilled the beans on Mayank Agarwal’s talk show, ‘Open Nets with Mayank’ which was uploaded on BCCI’s official website. Mayank displayed a picture to Kohli where he was keeping wickets and asked him, “how did this occur?” Kohli replied, “Kabhi Mahi bhai se puchiyo how did this occur. He mentioned ‘yaar do teen over simply hold wickets’.

Kohli commended Dhoni saying, “Then I understood he (Dhoni) has loads on his plate when he’s on the sector as a result of which he has to deal with each ball and likewise modify the sector.”

Kohli also expressed his views on a Test match draw. He said, for him there is no possibility for a draw. He would always attempt to win the game.