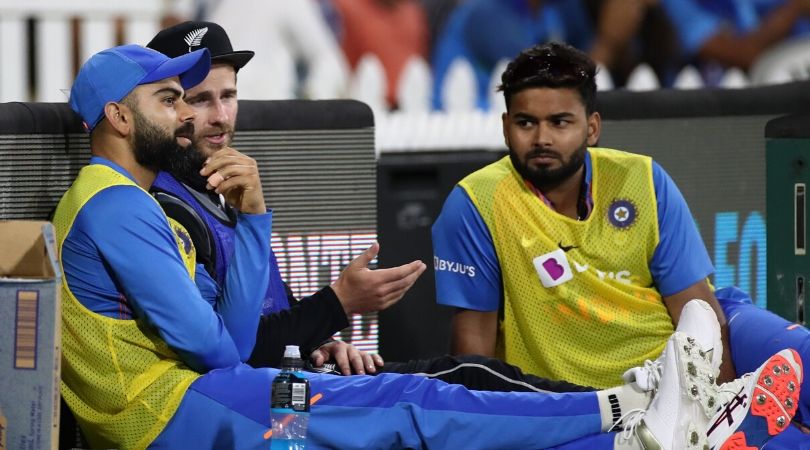 On Sunday, team India achieved a historic T20 series win over New Zealand. The visitors beat the hosts in the final T20 of the series and whitewashed them by 5-0. This is India’s first-ever T20 series win in New Zealand. Indian skipper Virat Kohli who led the team to the victory in first 4 matches chose not to play the final match of the series so Sanju Samson could get a well deserved chance.

Virat reveals chat with Williamson at the boundary line

Rohit Sharma led the team in absence of Virat Kohli. Kiwi side too missed the captaincy of Kane Williamson as he was not fit to play. Both the regular skippers were not the part of the game but still, they caught cameraman’s eye as both were seen sitting and having a chat at the boundary line. The image of them sitting together with India wicket-keeper batsman Rishabh Pant is already doing the rounds across social media platforms.

After the match, Virat Kohli was asked about the conversation he shared with Kane Williamson. Kohli went on to say that the duo talked about and ended up wishing luck for their upcoming matches. He said, “Kane [Williamson] and me have similar mindsets, similar philosophies. It is amazing that despite being from different parts of the world, we have similar thinking and we speak the same language. Despite what the scoreline suggests, I feel that New Zealand cricket is in the best hands and he is the right guy to lead this team.

Talking about the match, KL Rahul and Sanju Samson’s opened for the second consecutive time. However, Samson who opened the innings today once again failed to live up to the expectations as he lost his wicket scoring just two runs.

Although, KL Rahul and Rohit Sharma’s duo once again absorbed all the pressure and took the team’s score to 96 before Rahul lost his wicket on 45 runs. Rohit Sharma was retired hurt at the score of 60 and later in the second innings, KL Rahul captained the Indian side. India set a target 164-run target to the Kiwi side of which they fell 7 runs short.