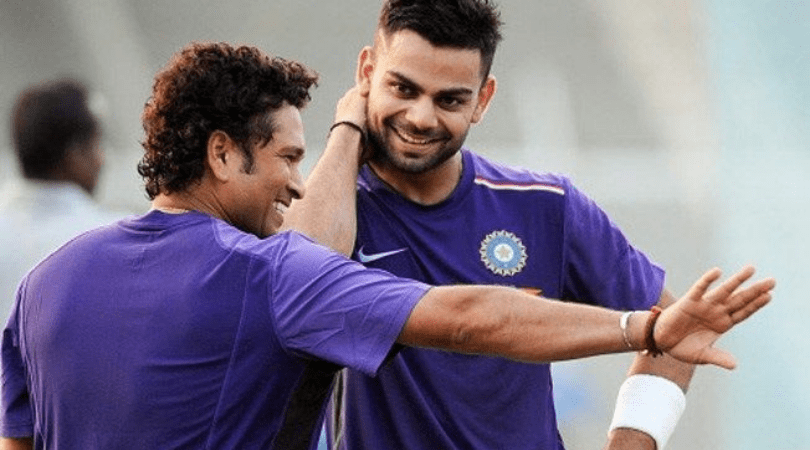 Sachin Ramesh Tendulkar was the best batsman of his days and he has almost all the major records in the history of cricket. Some of the records of Sachin Tendulkar are unbreakable, playing 200 test is one of them. However, Virat Kohli is beating some records of Sachin but according to experts, it is very difficult for any cricketer to survive for 200 Test Matches. Many cricketers of the modern era have started playing cricket seeing Sachin’s batting during childhood. Even the run-machine Virat Kohli is one of them.

Recently, Virat Kohli revealed that he had given something special gift to Sachin when he got retired. And also the Indian skipper expressed that he got very emotional on the day of Sachin’s Retirement.

Recently, Virat Kohli had made his appearance in the American Show ‘In-Depth with Graham’. Basically it is an American sports interview Television Program hosted by Graham Bensinger. There Virat Kohli had faced many questions and answered with very honestly. Such as early meet with Anushka Sharma, about there nickname, and the first thing they have said to each other. And also he also revealed that he gifted a special thing to Sachin Tendulkar.

Here is what Virat Kohli said in Interview

“We usually wear threads around our wrists in India. So, my father gave one to me which he used to have, just to keep with me. So I used to keep that with me in my bag and then I thought this is the most valuable thing I have.”

“My father gave this to me and I think I couldn’t give you anything more valuable and I just want you to know how much you have inspired me and how much you mean to all of us. This is my little gift,”

“So that was a very emotional thing for us to process, but his emotion obviously was of a different level at that stage. In front of his people going out like that, the most amazing farewell I have ever seen,” Virat Kohli said.