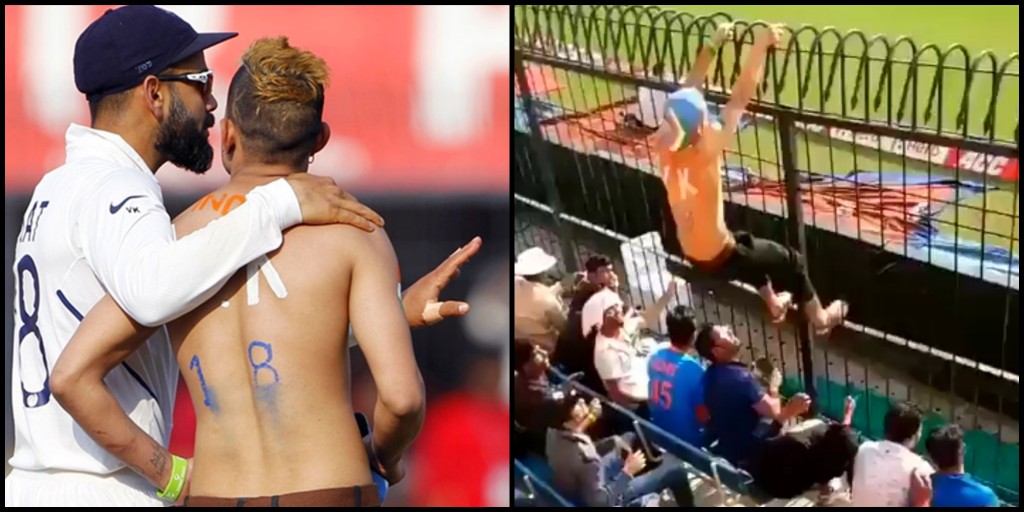 Yesterday, Virat Kohli and co. won the 1st Test match against Bangladesh at Indore. With this win, Virat Kohli created many captaincy records. India beat Bangladesh in this match by an innings and 130 runs. Under his captaincy, this is India’s 10th test win with an innings which is most for any Indian captain.

With every match and win, Virat Kohli’s popularity is increasing. He is the most popular cricketer on the globe at the moment. People not only like his cricket but also idolise him for his personality. Getting a picture with him or a chat is a big thing for fans.

But, not every fan can get a chance to get interact with him. That’s why some fans invade the ground during matches to touch the feet of their favourite players or take a selfie with them. Recently, we have seen such incidents happening with Virat Kohli, Rohit Sharma and even with Quinton de Kock too.

Yesterday at Indore too, a fan climbed the fence and invaded the pitch to meet Virat Kohli. the incident happened during the drinks break. The fan had painted Virat’s name and jersey number on his back. He rushed to ground and found Virat Kohli among team members. Kohli put his arm around the fan’s neck while requesting the security personnel to be gentle with the pitch invader.

Virat Kohli fan taking fandom to an another level…#INDvBAN pic.twitter.com/XyiT45jEXJ

Virat Kohli’s gesture won the hearts of netizens and earned praise on social media. However, Sunil Gavaskar had recently raised his voice against such incidents blaming security personnel for their irresponsibility.

Following a fan touched Rohit Sharma’s feet and unintentionally took the opener down during Pune Test vs South Africa, Gavaskar said, “These incidents happen because security people are not watching the crowd but are watching the match. This has been the perennial problem in India. The security is not there to watch the match for free. They are there to stop such interruptions from happening,”