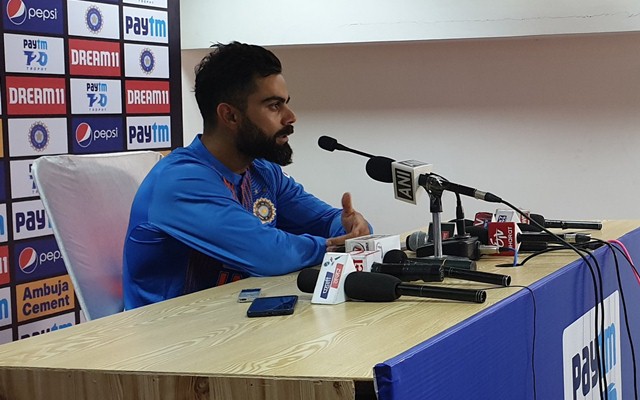 Virat Kohli Warns Youngsters Ahead Of Preparation For T20 World Cup: After taking the experience from Semi-Finals game in the ICC World Cup 2019, Team India is now ready for the preparation for their next Assignment i.e. T20 World Cup 2020. However, Indian Team have only 30 matches before the World Cup to prepare for, out of which the first match has already washed out. Currently, Team India is playing its first T20 series against South Africa for the preparation.

The first match of the series has already washed out in Dharamshala because of Heavy Rain. And now both the teams have moved to Mohali for the next Match on 18th September 2019. And the weather forecast for the Mohali T20 is pretty good, which is good news for the fans and players.

Although, for the young players of the team a warning has given by Indian Skipper Virat Kohli. As upon looking a limited time for the preparation, team captain issued a warning. During an Interview at Dharamshala, Virat Kohli has said the new players who would be picked have four to five opportunities to prove their worth. And the same had applied even for himself when he started, he further added.

“We are very clear. It is not that anyone will get 30 chances. Even when I came in the team, I didn’t think I will get 15-20 games and I knew I will mostly get chances in three to five games and I have to prove myself. One will get suppose five chances and he will have to prove himself. That is the level we are playing at. As the team management has that mindset, the individual should also have the same,”  Virat said in an Interview