Though the International Hockey Federation apologized for the mistake, people are calling out the match officials for the biasedness 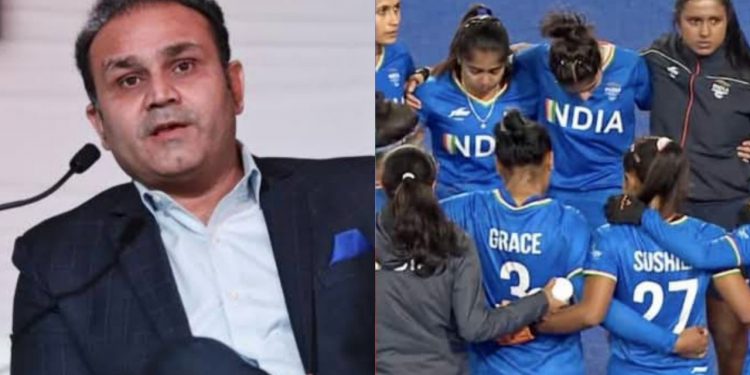 The Indian Women’s Hockey team locked horns with Australia in the 2022 Commonwealth Games to secure their place in the Final. The team fought hard but eventually lost the game in the shootout, however, there is one incident that has become the talk of the town. Amongst many other sportspeople, Virender Sehwag reacts to the controversial ‘clock’ incident which took place during the crucial game.

Both the teams battled hard to secure their spot in the final of the Women’s Hockey but it was Australia that trumped the Indian Women in the penultimate game. While team India still has a chance to secure the bronze medal, an incident which happened during the match against Australia is being talked about. Even former Indian cricketer Virender Sehwag reacts to the biasedness of the match officials during the semi-final.

The much-talked incident took place during the penalty shootout when Australia’s Rosie Malone was ready to take the shot. She went for the shot but missed it, however, the match official informed the players that the timer didn’t start and the shot had to be re-taken. This particular ‘clock’ incident has stirred up a big controversy and people are calling out FIH for this major blunder.

India’s former swashbuckling batsman Virender Sehwag reacts to this biasedness as well with his Tweet. Sehwag took to his Twitter account and posted a video with a taunting caption towards the FIH. The cricketer mentioned in the caption how such biasedness was prevalent in cricket also until they became a superpower and soon the clocks in hockey will also start on time.

Penalty miss hua Australia se and the Umpire says, Sorry Clock start nahi hua. Such biasedness used to happen in cricket as well earlier till we became a superpower, Hockey mein bhi hum jald banenge and all clocks will start on time. Proud of our girls 🇮🇳pic.twitter.com/mqxJfX0RDq

After the blunder, the International Hockey Federation came up with an apology ensuring that the incident will be thoroughly reviewed. In their statement, FIH said, “This incident will be thoroughly reviewed by the FIH in order to avoid any similar issues in the future.” It is to note that Rosie Malone didn’t miss the shot the second time and Australia won the match by a margin of 3-0.