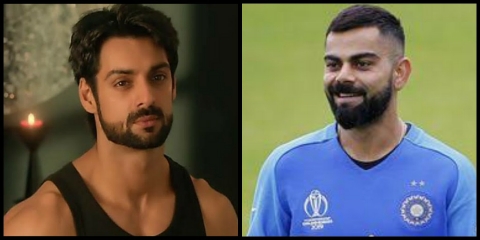 Effects of this pandemic are seen on any form of entertainment, be it sports, cinema, art or even music. It’s deprived fans of their regular dosage of entertainment. Well it doesn’t seem to be the case with fans following ‘Virushka’ (aka Virat Kohli & Anushka Sharma). And what better than a funny video to keep their fans entertained. The celebrity couple came up with yet another hilarious act for their fans. In a video posted on social media by his wife Anushka Sharma, Indian cricket team captain Virat Kohli can be seen tiptoeing a pretentious animal (more of a dinosaur like) walk, and a roar at the end. As funny as it looked, Anushka captioned it – ‘I spotted ….a Dinosaur on the loose.’

In no time fans and even fellow celebrities stormed the post with comments, likes and equally hilarious memes. Add to its funny side, the video also caught an unexpected splurge in the hashtag #dinosaur, well…that’s some trending, courtesy twitteratti! One of the tweets read, ‘At best a kangaroo. Not a dino’ (@BrahmaandKiMaa). Another follower associated Kohli’s pose to the famous Hrithik Roshan dance move from the movie Koi Mil Gaya. ‘Its magic its magic ft Virat Kohli’, he tweeted.

As on the celebrity front, Kohli’s teammate from his U-19 days and TV actor Karan Wahi reacted with a number of ROFL emojis. Kohli though came up with a spontaneous response. He commented – ‘@karanwahi tujhe badi hassi aa rahi hai saale (you are laughing to much)’. Bollywood star Ranveer Singh reacted with a ‘Whut’, to something as hilarious as this which he hadn’t seen coming from the Indian captain.

Ever since the lockdown started, Kohli and Anushka have taken to social media to stay up and close with their fans. Be it the promotion of ‘Paatal Lok‘, her in-house production to Kohli’s regular fitness posts, the duo has being expressive all throughout. Truly, we’d say – ‘Stars on and off the field’.