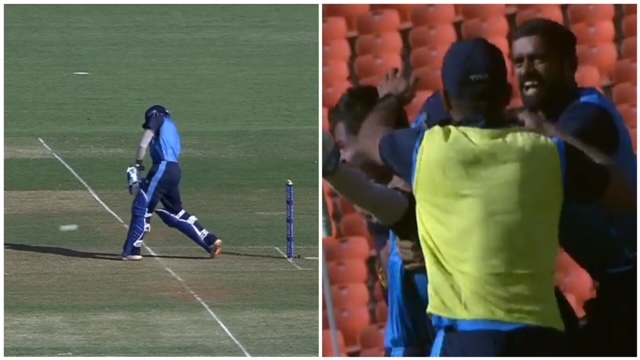 The quarter-final of the Syed Mushtaq Ali Trophy between Haryana and Baroda turned out to be an edge-of-the-seat thriller with Vishnu Solanki being the protagonist who saved the day for his team Baroda. Solanki’s last-minute exploits with the bat left each and every viewer flabbergasted and in awe of the 28-year-old’s batting.

The third quarter final between Haryana and Baroda saw some scintillating batting by Vishnu Solanki who single-handedly turned the game in his team’s favour on the last three balls of the last over of the match. With his thrilling batting, Solanki ensured a semi-final spot for Baroda. The team looked out of the game until Solanki went berserk in the 20th over.

Solanki’s inning was a reminiscent of Dinesh Karthik’s inning against Bangladesh in the Nidahas Trophy final which won India the T20I series. Karthik had played a sensational inning of 29 off just 8 balls and won the match for India with a maximum on the last ball of the match. Vishnu Solanki stole all the limelight when he hit 16 runs off the last 3 balls.

Baroda needed 18 runs off the final over and Sumit Kumar was given the responsibility to defend the score. Kumar started the over pretty well as he only conceded 3 singles off the first 3 deliveries. All of Baroda’s hopes were down but Solanki had other plans. The batsman amazed one and all as he went on to hit a six, four and six on 4th, 5th and 6th delivery of the over respectively.

With the help of a blazing inning by Solanki, Baroda stormed into the semi-final. Baroda will now be up against Punjab in the 2nd Semi-Final on 29th Jan. The final of the tournament will be played on 31st January in Ahmedabad.