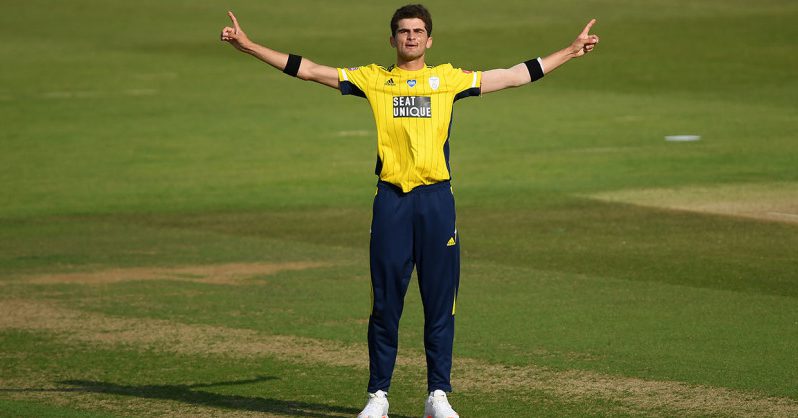 It’s a dream for any bowler to get a hat-trick during his stint in the team and when that happens, a bowler is surely on cloud nine. Many bowlers have achieved the feat in the past and the latest to join that list is young Pakistani pacer Shaheen Afridi. The bowler had a gala time on the field on Sunday as he claimed four wickets on consecutive deliveries.

Shaheen Afridi was not having a very good tournament before the game on Sunday. The batsmen were finding it easy to take him to the cleaners, but that changed and changed emphatically. The 20-year old speedster made history when he clean-bowled four Middlesex batsmen on successive deliveries.

Hampshire had scored only 141 runs in their 20 overs and Middlesex were looking all set to accomplish the task easily with John Simpson leading with the bat. Middlesex were at 119 for the loss of 6 wickets by the end of17th over. They only needed 23 runs off the last three overs which is considered to be a very achievable total by the standards of T20 cricket.

It was in the 18th over when Shaheen Afridi ran a riot against the Middlesex batsmen and ended with the career best figures for any bowler for Hampshire in Vitality Blast T20. The unique thing about these wickets was that all of them were clean-bowled.

Afridi started by taking the big wicket of John Simpson who was in full mood to take his team home. This was followed by the wickets of Steven Finn, Thilan Walallawita and Tim Murtagh. Shaheen Afridi was adjudged the Man of the Match for his outstanding performance.

All thanks to the stellar spell by Afridi, Hampshire won the match by 20 runs. This spell will give Afridi a much-needed boost. Needless to say, it was one of those spells by Afridi that bowlers dream of bowling while they are playing for their team.