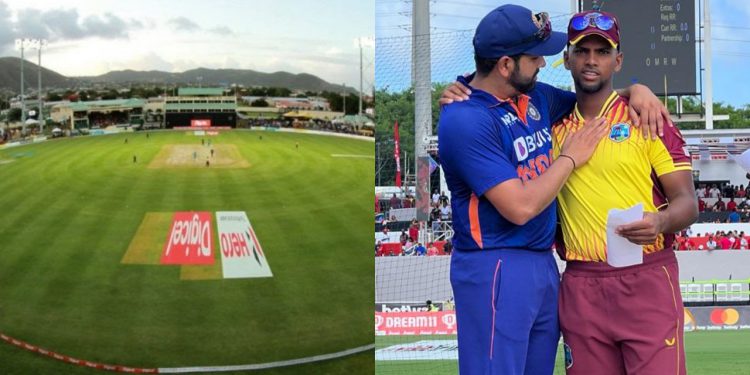 Basseterre’s Warner Park stadium is going to be the venue of the second and third T20Is between the West Indies and India. In this article, we will be previewing the first of those games as we cover the pitch report, T20 records, and live telecast details for the Warner Park stadium that will host the second IND vs WI T20I match.

The Indian tourists are in the process of fine-tuning their squad ahead of the Asia Cup and T20 World Cup. Injuries or unavailabilities around some of the key members have allowed team India to experiment with their playing XI on a frequent basis.

One major talking point ahead of this game will be to see who slots in at the number 3 position. Shreyas Iyer, the incumbent one-down batter, has been under much scrutiny in recent times owing to his troubles against fast, short deliveries. He faces tough competition from the likes of Deepak Hooda and Sanju Samson, both of whom are in good form. It’s safe to say that these next few matches will just about finalize the Indian batting order ahead of the World Cup.

Another interesting point would be to see what bowling combination the team opts to go with for this game. At the moment, the likes of Harshal Patel, Avesh Khan, and Arshdeep Singh are all competing to establish themselves as the premier pace-bowlers of the team. Even in the spin bowling department, barring Yuzi Chahal and maybe Ravindra Jadeja, no other player is guaranteed of a spot in the playing XI. The coming few matches should ideally help the team management resolve some of that conundrum.

While India has the luxury of trying out a variety of combinations in these few games, their West Indian hosts, ironically, are much more hard-pressed for game time. Barely three months away from the all-important WT20, the men-in-maroon are yet to identify their nucleus of players. The relative lack of international experience among their bowlers and all-rounders is yet another cause of concern.

Having said all of that, there is a lot of promise in the talented likes of Romario Shepherd, Odean Smith, Keemo Paul, Dominic Drakes, and a lot of other players who’ve been impressive in domestic tournaments. But it’s about time that the experienced likes of Jason Holder, Shimron Hetmyer, Rovman Powell, and captain Nicholas Pooran himself start taking the responsibility to win games for the team. It is a big ask, especially against a quality side like India, but if the young players and experienced pros are able to combine forces well, we could be in for some upsets, which would make the series very entertaining.

Teams chasing have generally had the upper hand playing on this surface. This can be attributed to the fact that the wicket here is low and gripping, which is a big advantage for fast bowlers who like to take the pace off the pitch.

It is expected to be a cloudy day on Monday with a 10 per cent chance of rain. There will be a lot of humidity (72 per cent) and some wind (27kmph) on the ground, so it could be a tough outing for bowlers who rely on extracting movement out of the ball.

Users of the FanCode app will have exclusive access to the online streaming of the West Indies vs India games. Television coverage of the series is available only on DD (Door Darshan) Sports.